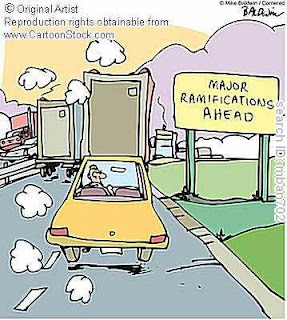 Sometimes it’s hard to keep the doomer faith in the face of the relentless cheerleading and obfuscation pumped from the mainstream media machine every day at the direction of our corporate overlords. Every time it seems like reality is about to pop the bubble of delusional faith in the system held by the vast majority of Americans, The Powers That Be somehow manage to pull out another magic trick that resets the Hologram and keeps the façade of business as usual firmly in place. Yes folks, the truth is out there, but it’s as lonely as the guy who established the “Drag Queens for Michelle Bachmann” political action committee.

In these times of enforced normalcy, looking beyond the immediate horizon can help one regain one’s bearings. Hard to believe, but the middle of the 21st century is now less than 39 years away. The Beatles broke up longer ago than that. It’s a date well within the expected lifetime of anyone under the age of 40 today. Newborn babies and toddlers will be just approaching middle age. In short, it is a time frame that ought to at least occupy your thoughts at some point, especially if you have children.

The United Nations has predicted that world population will reach nine billion souls by that time; up from the seven billion mark we are on track to pass later this year. From a purely demographic standpoint, this is actually an optimistically low number. If population growth were to continue at the current rate, the number of humans occupying planet Earth will actually top 10 billion by that time.

Unfortunately for anyone of a humanitarian bent, there are a whole host of reasons to believe that even the lower estimate is actually wildly off on the high side and that world population may actually end up being far LESS then than it is today. So many factors are converging to put downward pressure on the current number of approximately 80 million in net population growth every year that it is difficult to keep track of them all.

Internet readers seem to love lists, as they pop up repeatedly on many of the most high traffic sites. So in that spirit, here’s a handy list of 10 current trends that are sure to go from being statistically ominous today to wreaking mass havoc by middle of this current century:

1). Peak Oil - Conventional crude oil production peaked in 2006, and total production including non-conventional sources has only slightly increased since then. Oil producers are pulling out all the stops to increase production where they can, and yet are only barely managing to overcome the depletion of older oil fields. Simply stated, there is no other energy source that can replace oil as far as density and ease of use. By 2050, the world will likely produce only a tiny fraction of what it does currently, with dramatic consequences to our modern industrial civilization.

2). Peak Phosphorous – This one is far less well known but just as serious as Peak Oil. Phosphorous is a key ingredient in the production of fertilizer, without which modern industrial agriculture would not be possible. Phosphorous production is expected to peak by the year 2030 and begin to decline thereafter. Once it does, the world will no longer be able to increase the production of the grains that are vital to feeding many billions of people and once decline sets in, yields will drop accordingly.

3). Peak Fish – Fish stocks in the world’s oceans are already beginning to crash due to overfishing. At current rates, it is expected that the world’s oceans will be nearly devoid of animal life by mid-century just at a time when agricultural production is also plummeting due to Peak Phosphorous.

4). Peak Water – Hundreds of millions of the world’s poor already do not have access to clean drinking water, and supplies are going to be even more strained as populations continue to grow. In the United States, the Ogallala Aquifer that irrigates the Great Plains is depleting rapidly from overuse and could be effectively dry by mid-century, returning the middle of the country to the days of the Dustbowl and rendering a vast swath of irrigated agricultural land utterly useless.

5). Peak Tin (hat tip to Dave Cohen of Decline of the Empire blog) – tin is a key component of all electronic items that are produced. Production of the element is just now reaching its peak at a time when sales of such items have become a vital part of the world’s economy. Take away all that ICrap and world GDP would take a significant hit. Given the disposable nature of manufactured products today, by 2050 most electronic devices will likely have become useless relics.

6). Peak Coal – China’s voracious appetite for coal to feed its booming economy is depleting what was once thought to be a couple of centuries' supply much faster than expected. Like with oil, most of the easy to extract and high quality coal reserves are already gone, increasing the cost over time for every unit of energy mined. Concurrently, increased burning of coal also exacerbates climate change (see below).

7). Peak Infrastructure – The United States alone has tens of thousands of miles of paved highways, many more secondary roads and thousands of bridges. Much of this infrastructure is aging and in need of repair and replacement. The high cost of asphalt (made out of oil) and declining tax revenues are causing a big slowdown in fixing and replacing it. By 2050, the nation’s transportation grid will likely be in an advanced state of decay, eventually making travel as difficult as it was before the age of the automobile.

8). Climate Change – Whether you believe global warming is man made or not, the general scientific consensus is that it is happening and getting worse more rapidly than expected. Droughts, heat waves and more powerful storms such as hurricanes and tornadoes are becoming more frequent and sea levels will rise more rapidly. By mid-century, many low lying coastal areas will likely be inundated, former agricultural areas will be decimated by lack of rain and huge areas of storm-related destruction will likely be left unrepaired because of economic collapse.

9). Nuclear Contamination – Many of the world's 400+ nuclear power plants are rapidly aging and nearing the end of what was originally thought to be their useful life span. In the United States, the decision has already been made to keep them operating far longer than originally intended, greatly increasing the risk of a major accident. Additionally, spent fuel rods are stored in facilities that require a power source to keep them contained. Within the next few decades it seems inevitable that serious accidents and breaches of containment will happen with greater frequency as electric grids break down, covering large swaths of the planet with massive amounts of deadly radiation.

10). Peak Economy – the great financial crash of 2008 was the first major peak oil-induced economic shockwave. The crash was brought on because the previous “prosperity” was purchased through enormous amounts of public and private debt that can only be serviced if the economy continues to grow. The economy can only continue to grow if energy supplies continue to increase. Peak Oil and peak other resources means this cannot happen and that additional and larger economic shockwaves are inevitable before the neoliberal, globalized world economic model collapses in a heap.

Add it all up and it doesn’t portend for a very positive future. In fact, it seems likely that a mass dieoff of the world’s population will be underway by the by the middle of the 21st century. I take no joy in reporting any of this. Obviously, the suffering that results will be of a scale far beyond anything previously seen in human history. I would be positively delighted to be proven wrong about what I’ve written above. But I don’t think I am.
Posted by Bill Hicks at 6:50 AM