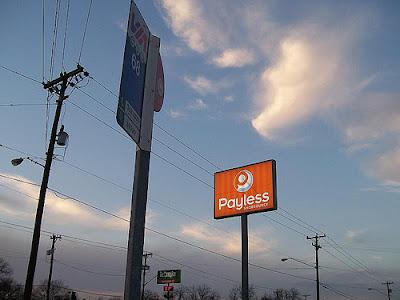 Yet another sign that our consumer economy is slowly imploding was an announcment reported today in the Dayton Business Journal:


The parent company of Payless and Stride Rite shoe stores is planning to close 475 of its more than 4,000 stores and will consider putting itself up for sale, the company announced Wednesday.

The Associated Press reported the company posted a $35 million loss from second quarter results on Wednesday.The news of the store closings and potential sale of the company came as part of the larger news of its second-quarter results.


The article does not mention how many employees stand to lose their jobs, but a safe guess would be in the thousands. I wrote in my August 21st post, "The Drip...Drip...Drip...Begins for Sears" that I believed the recent market crash was likely to soon be followed by another wave of retail bankruptcies and store closings as companies that had been treading water waiting for a real economic recovery to begin finally succumb to the reality that no such recovery will be forthcoming. With this story, we are seeing more evidence of exacly that happening.
Posted by Bill Hicks at 2:50 PM