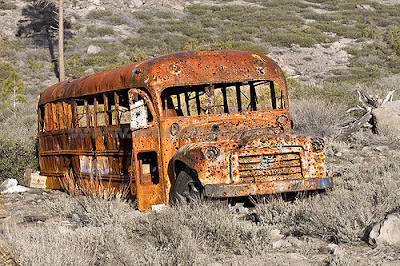 While others focus on the ongoing stock market crash, I'm continuing my vigilant watch for the many other ongoing signs of collapse. Here is another one I ran across yesterday. From a local Arizona teevee station:


The latest casualty of education budget cuts left a Phoenix school with one less transportation option.

According to ABC15, the Machan School decided to get rid of bus services due to budget cuts and a drop in enrollment.

The school, part of the Creighton School District, has enacted a walk-to-school program that will help the estimated 300 children affected by the bus cut get to school.

When I was a kid, I rode the bus to elementary school since I didn't live close enough to walk the distance. Every day, a dozen big, bright-yellow buses would pull up in front of my school in the morning and again in the evening. It was as basic a service to us as the school-provided lunches, and one we kids never really even gave any thought to.

What's really amazing about this story is that school buses are one of the few forms of public transportation in America that actually enjoy wide acceptance. Only a few large American cities have subway systems, and most smaller communities do not even have municipal buses or any other form of mass transportation.

My small Midwestern hometown, for example, did away with its municipal bus service back in the 1970s even as we kids kept on riding the school buses. In a time when the effects of Peak Oil are really starting to bite, American communities should be ramping UP public transportation, not discontinuing it. The fact that we are doing the opposite just demonstrates yet again our collective insanity.

You can say that this report is about just one school in just one community, but given all of the other signs that our economy is imploding, would you be willing to bet that this is the last such story we're going to see going forward? Or, like the Central Falls, Rhode Island, municipal bankruptcy last week is it more probable that this is instead the leading edge of yet another unfortunate national trend?

I'm betting on the latter, of course, not that I take any pleasure whatsoever in reporting the fact. The ongoing collapse is now becoming so obvious that it is becoming dangerous to continue to ignore it.
Posted by Bill Hicks at 6:42 AM