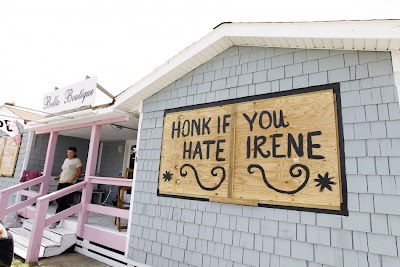 Well, I don't particularly hate Irene. Locally, she's been nothing more than a mere annoyance. We've had light-to-moderate rainfall for about 10 hours now with an occasional wind gust. If you hadn't turned on a teevee for the past week, you might be inclined to think that it was merely another stormy night.

Looks like the East Coast and particularly New York City dodged The Big One this time around, but that's not to say there won't be a lot of unpleasantness for the coastal communities. Weird week in these parts, with first the Earthquake and then the hurricane. All told, it could have been a LOT worse.

I hope everyone stays safe, and I'll be resuming normal blogging tomorrow.
Posted by Bill Hicks at 9:11 PM