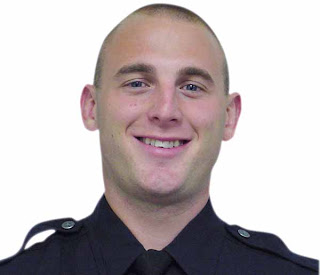 In last Friday’s post, I wrote about how politics in our celebrity-obsessed culture has devolved to the point where fame is the only real qualification remaining for high political office. In the same post, I added:


What it really comes down to is that in modern America, with an imploding economy rapidly eroding the conventional avenues of upward mobility for the working and middle classes, the one remaining route to riches is to become famous. It no longer matters what you become famous or infamous for (just so long as you avoid serious prison time), only that you get people to pay attention to you.

So imagine, if you will, being a frustrated young man with a highly stressful job that doesn’t pay all that well…perhaps you’re a cop working for a big city school district. It’s a steady gig, but you have to put up with a lot of guff from the students and even if you make Sergeant someday it’s not like you’ll be living on easy street or anything. What can you do to get ahead and break out of your hopeless rut? I know, fake your own shooting!

Sound incredible? Well, it actually happened earlier this year out in California, as reported on Friday by the Los Angeles Daily News:


A Los Angeles Unified police officer fabricated a story about being shot while patrolling near El Camino Real High School last January for financial gain and to cast himself as a hero, a prosecutor said Friday.

During opening day in his non-jury trial, Jeff Stenroos was branded as a serial liar who told fellow officers he'd been shot once while wearing a bulletproof vest.

The Jan. 19 incident triggered a 10-hour, $361,000 manhunt in which an eight-square-mile area was cordoned off and nine schools were locked down.

"The evidence will show that the shooting was staged. There was no gunshot, there was no actual shooting," said prosecutor Paul M. Nunez.

Stenroos of Santa Clarita was indicted in May on charges of filing a false police report, preparing false documentary evidence, altering evidence, insurance fraud and workers' compensation fraud -- all felonies -- and a misdemeanor of falsely reporting an emergency.

He faces nearly six years in prison if convicted.

"Jeff Stenroos placed his desire for money and being a hero above the safety of the children he was sworn to protect," Nunez told Superior Court Judge Richard H. Kirschner, who is trying the case without a jury.

Wow. Just think of all the good things that would have come Officer Stenroos’s way had he nefarious scheme actually worked. “Hero Cop Shot While Saving Students from Rampaging Marauder,” the headlines would have read. Certainly, Fox News would have been there in his hospital room to interview him about his brave heroics (and, not incidentally, insinuate how horribly unsafe all those librul-enclave big cities are). Maybe there would have been a book contract. Heck, this being LA, perhaps the story could be made into a movie-of-the–week. Cause everybody in this town knows that once you have your own publicity agent working for you, the sky is literally the limit.

What really strikes me about this case is just how terribly desperate Stenroos must have been to have even tried his scheme in the first place. From the same article, here is the testimony that sunk him:


Woodland Hills resident Michael Brodey testified that he happened upon Stenroos about 9:30 a.m. Jan. 19, when he found the officer "writhing" in the street next to his patrol car, apparently suffering from with a bullet wound his chest.

Brodey said he used the patrol car radio to make an "officer down" call and noticed a .45 handgun and shell casing on the floor under the steering wheel.

"He said he couldn't talk and was having trouble breathing," Brodey recalled. "I made the assumption he had been shot but I didn't see any blood."

Ummm…that might not be the dumbest thing I’ve ever read, but it is certainly high on the list. Really, it sounds like the sort of improbably wild idea that might have been cooked up by one of the high school students Stenroos was supposed to be protecting rather than that of a full grown, functioning adult. The idea that this delusional human was carrying firearms while patrolling the local schoolyards ought to send chills down the spine of any parent of a public school student in Los Angeles.

Yes, for all that you have done, Los Angeles Unified Police Officer Jeff Stenroos, to prove just how low one can really sink in an attempt to achieve fame and fortune in modern day America, I hereby proclaim you to be a Real Attention Whore of Genius.
Posted by Bill Hicks at 6:53 AM