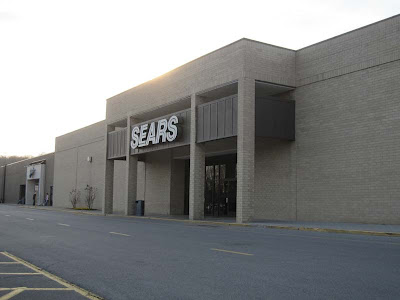 Ask not for whom the bell tolls, it tolls for one of America's longest running retail concerns. As reported by the Milwaukee Journal-Sentinel:


Sears will close a hardware store at 1715 Wisconsin Ave. in Grafton In December as part of a nationwide shutdown of 29 stores.

I reported earlier on the closing of the Kmart store in Burlington in November as part of the same national reduction of stores. The 29 stores include 10 Kmart stores, three Sears stores, 12 hardware and appliance stores, two Sears Auto Centers and two Great Indoors stores.

In addition to the jobs lost to the closings, the company will eliminate 250 support positions.

At one time Sears was the most prominent retailer in the United States, and for many years its catalog was an American icon, bringing availability of the latest consumer products to isolated communites all over the country back in the days before the Internet, television or even telephones. In recent years, however, its catalog business became a vicitim of the Internet era, and Sears became just another store, with nothing particular to differentiate it from any other mid-market retailer.

Unfortunately for Sears, the company is now following the same pattern as the recently defunct Borders...closing down underperforming locations in the wake of declining revenues in a desperate attempt to regain profitability. Any sentient observer should know how this story will play out. Sears will close some stores, then lose more money, then close more stores, then lose more money...continuing along the downward spiral that will eventually lead to bankruptcy and the nationwide going out of business sale.

It's inevitable. A substantial portion of Sears's customer base is either losing their jobs or seeing their pay and benefits reduced. They are also faced with declining home values, meaning that the great home equity ATM has been forever shut off as a source of spending to maintain the illusion of prosperity.

Sears will do what so many other retail chains have done before them, try to hang on until the economy "recovers." At some point, however, the company will come to recognize that the light at the end of the tunnel is in fact an onrushing train.
Posted by Bill Hicks at 2:41 PM