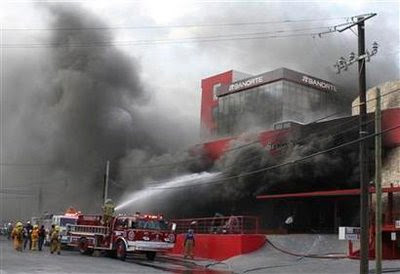 Most Americans don’t realize it, but there is a full-scale war going on just across our southern border. The latest atrocity was the gasoline bombing of a casino in Monterrey last week that killed at least 52 people. Like much of Mexico’s recent catastrophic drug-related violence, the attack appeared to make little sense. Sadly, as reported by Antiwar.com, American taxpayers are underwriting this awful conflagration:


The attack comes as the New York Times reports yet more American involvement in the Mexican government’s military attack on drugs. The US has allowed Mexican police to launch raids into Mexico from US side of the border, but says it doesn’t participate.

The US often has drug suspects extradited to stand trial from across the Americas as part of its various deals with Colombia and Mexico, and the Times also recently revealed that the CIA, DEA, and their contractors were operating inside Mexico.

These efforts have only served to ramp up the violence; some 42,000 people have been killed since the $1.4 billion Mérida Initiative began in 2006. Mérida funds the Mexican government to stop the flow of drugs into the United States, the Americas’ primary illicit-drug consumer.

As reported by Reuters, Mexican President Felipe Calderon is finally beginning to lose patience with the American-funded effort:


Lashing out at corrupt officials in Mexico and "insatiable" U.S. demand for drugs for fomenting the violence, Calderon urged Congress to stamp out drug consumption and stop illegal trafficking of weapons across the border into Mexico.

"We're neighbors, we're allies, we're friends, but you are also responsible," a somber and angry Calderon said to the United States in a speech after meeting his security advisers.

So why, after five years and tens of thousands of his own citizens being butchered is this American stooge finally beginning to get his dander up? Reuters goes on to report:


The casino attack is particularly bitter for Calderon because the victims were mainly well-to-do civilians with no link to the conflict, in an area that has traditionally been a electoral stronghold for the business-friendly PAN.

Monterrey, which lies about 230 km (140 miles) from the Texas border, is a relatively wealthy city of about 4 million people and is home to some of Mexico's biggest companies. It was for many years seen as a model of economic development but it has been ravaged by the drugs war over the past two years.

When it was merely poor and working class Mexicans being slaughtered on the streets of Juarez, as had primarily been the case to date, President Calderon was happy to take all that American largess despite the awful human cost of waging the War on Drugs. But as soon as the violence hits home and begins to affect his own well-to-do supporters, suddenly he finds his backbone and starts criticizing the U.S. policy.

It is absolutely pathetic that so many Americans insist upon blindly waving the flag and proclaiming that they live in The Greatest Country in the World, while their government engages in such despicable activity right on their own doorstep. It’s also telling that during the recent federal debt ceiling debacle none of the politicos suggested that maybe, just maybe, this counterproductive policy should be ended once and for all. Instead, funds that go to help average people continue to be on the chopping block, while money earmarked for more violence and destruction remains untouchable. It’s just another sad example of an empire in terminal decline, and for the Mexican people caught in the crossfire its demise can't come soon enough.
Posted by Bill Hicks at 6:46 AM