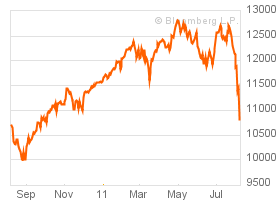 I don’t write about the stock market very often on this blog, mainly because I haven’t owned any stocks since back in 2005 when I got spooked about the obvious incompetence of the “leaders” running our economy. Never once have I been tempted to get back in since then, not even during the hallucinatory Federal Reserve-fueled rally off of the March 2009 lows. Sure, there was lots of money to be made provided you were prepared to bail out at the first sign of trouble, but the sharp rise was based upon the biggest fraud yet perpetrated in the financial markets, and I had no desire to be a part of any of that.

The TARP law bailing out the big banks, the Zero Interest Rate Policy of the Fed, the Recovery Act stimulus law, two rounds of Quantitative Easing, Cash for Clunkers, New Homebuyer Tax Credits; all of these programs and more plus an extra three trillion dollars in federal deficit spending over and above 2008 levels bought us exactly two-and-a-half years of kicking the can down the road. Now we’re back at square one, and the politicos—from Obama to Geithner to Bernanke to Reid to Boehner—have shot their collective wad trying to salvage the unsalvageable.

This is the only way it could possibly have turned out, of course. In my July 14th post, “Why We’re Screwed (Part 4): The Propaganda Ministry Touts the Dow Jones Industrial Average,” I wrote the following:


If you spend a lot of time watching our corporate owned and thoroughly corrupted mainstream media, you might have the rather ridiculous idea that the American economy is in the midst of a recovery from the recession that accompanied the 2008 financial crash. Sure, there might have been some bumps along the way, but expansion has resumed as evidenced by two years of positive GDP growth and the fact that jobs are being created again. It’s just a matter of time now before all of the unemployed folks are back to work and home values resume soaring to the stratosphere.

Sadly, far too many people still believe all that nonsense. They have failed to notice that the only thing propping up the so-called “recovery” is an insane amount of U.S. Government deficit spending ($1.5 trillion annually out of $14 trillion dollars in total economic output), without which the GDP numbers would be an astonishing 10.7% lower than they have been the past three years. There’s no other way to spin those figures—three straight years of double-digit economic contraction are Great Depression numbers. That’s why for tens of millions of people it doesn’t FEEL like the economy has recovered, whatever the news might say. If you got laid off in 2008 or early 2009 and weren’t lucky enough to get a stimulus program-funded government contract, you were likely left to become a “99’er” whose unemployment benefits are now running out.

In that very same post, I asserted that the stock market numbers, which were being deliberately goosed by the U.S. Treasury and the Federal Reserve, were also being used as a propaganda device to convince the masses that the “recovery” was real in order to get them spending again. Thus I concluded:


At some point, those doing the manipulating will run out of ammunition and there will be another crash. They will then no doubt argue for more bailouts, more stimulus and more quantitative easing to get this whole cycle going all over again. We’re now so far in the hole, that trying to keep the game going a little longer is all they have left. The problem is, by that time the dying economy may have finally reached the point where all attempts at emergency resuscitation prove ultimately futile.

Which is what makes the outcome of the recent debt-ceiling debacle all the more remarkable in its collective lunacy. Blind faith in the system and the idea that real, organic economic growth not tied to federal deficit spending was about to resume was a key pillar propping up the whole creaking façade of business as usual in the economy. The politicos with their insane antics—running the timeline for a debt deal right up to the edge of default and then refusing to take any realistic measures to reduce the deficit— shook that pillar until the whole rotten edifice came crashing down on their heads.

So where do we go from here? The future is unknowable, of course, but if I had my guess I would bet that in the real economy we’re about to see another huge wave of commercial bankruptcies and accompanying layoffs. I suspect there are many companies that have been treading water waiting for the expected real recovery to take hold that will now succumb to the inevitable and go under. This will, of course, cause tax revenue to plunge yet again and ratchet up the pressure on already financially strapped governments at every level, causing government employees to also lose their jobs in ever-greater numbers.

As total employment decreases, and the ratio of those with jobs to those being supported by government programs also continues to decrease, we will eventually reach a point where the government can no longer tax and borrow enough money to keep the system functioning. This will mark the true moment of collapse. As to how long that will take, it’s anyone’s guess.
Posted by Bill Hicks at 6:54 AM