Colleges are Charging Huge Tuition Fees—Because They Can 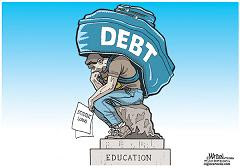 As you know, I am pretty rough on the mainstream media for the lies and obfuscations it perpetrates daily in support of the status quo. But once in awhile I am pleasantly surprised to see a glimmer of truth shine though the grey clouds of celebrity worship and slavish obedience to corporate America and it’s craven political hand puppets. Such an article appeared this weekend in a Gannett newspaper from Indiana called the Boiler Station, which examined the reason why college tuition costs have exploded these past 20 years. The article’s conclusion? Universities charge ever higher tuition because the can. Here’s an excerpt:


The reason tuition has been on such a steady upward march can be found in the most basic lesson of an entry-level econ class: supply and demand.

Tuition goes up because it can -- because there currently are no market forces or legislative controls to curtail it.

"That is exactly how people in the major research universities behave," said Vance Fried, an Oklahoma State professor and author of "Better/Cheaper College: An Entrepreneurs Guide to Rescuing Undergraduate Education."

"Because there is a demand, you can raise tuition ... and people still come."

The article goes on to explain just how out of balance tuition cost increases are with the rest of the economy:

In that same time, the Consumer Price Index has increased 81.9 percent, according to a Bureau of Labor Statistics calculator. If Purdue's tuition increase had matched that Consumer Price Index increase dollar for dollar, the 1989 tuition of $1,916 would be $3,487 -- as opposed to the $9,478 Purdue students will pay during the 2011-12 school year.

As that last sentence states, those statistics really are staggering. It’s bad enough that tuition has been increasing at nearly four times the rate of inflation, but even worse is that it has been increasing at a mindboggling TEN TIMES the rate at which incomes are increasing. Granted the article only covers Indiana, but I would bet these numbers are fairly reflective of the country as a whole.

The article goes on to cite several reasons for the increases, from reduced state funding to huge salary increases for university professors and administrators. There are also plenty of anecdotes about families and students struggling to pay these huge costs.

Of course, this being a mainstream media article, there was still one big elephant in the room that they managed to ignore—the role that the student loan industry plays in helping to jack up tuition costs. Though nominally issued by private institutions, student loans are in fact guaranteed by the federal government, and as such are generally not dischargeable in bankruptcy. Because the lending institutions are thus fully insured against taking any losses, they have no hesitation about freely giving out whatever insane amount of money the student needs to cover their tuition nut.

This means that the real culprit in the out-of-control tuition increases is the federal government. Without student loan guarantees, there would be a natural, market-driven force holding tuition down—namely the actual ability of the students to pay back the loans. The sad fact is that the student loan program, however well intentioned upon its original creation, has become yet another corporate welfare program that sticks the bill on the taxpayer.

All of this would not be a complete disaster if the students taking out these ever-higher loans were still able to secure high-paying jobs upon graduation. More and more, however, recent college graduates, especially those in the fields of liberal arts and the humanities, are finding that they are graduating with a huge debt load into an economy with few good jobs available to them. I wrote about one such unfortunate young woman in my June 21st post, “$100,000 in Student Loan Debt—Can’t Find a Job.”

Though none of our political “leaders” will ever admit it, a sea change has taken place within the American economy since the market crash in 2008. The days when young people could spend four years self-actualizing while studying something "fun," and then still find a cubicle-dweller position somewhere that pays the bills after graduation are over.

Sadly, because there is still so much money to me made by everyone involved in this scam—from the professors, to the administrators, to the financial institutions—the truth is not being told to these kids. Instead, they will continue to be turned into debt slaves before they even are allowed a chance to get started in life by a thoroughly corrupt system that will not change its ways until that long overdue day when it finally and deservedly collapses.
Posted by Bill Hicks at 6:50 AM