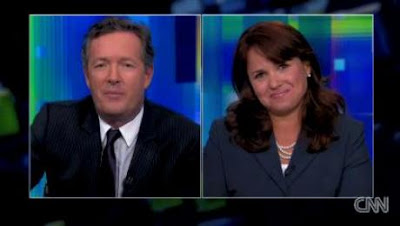 The liberal blogosphere was all atwitter on Wednesday with the news that failed Republican Delaware Senatorial candidate Christine O’Donnell, she of the anti-masturbation crusade and the “I am not a witch” campaign advertisements, became angry during an interview with CNN’s Piers Morgan and stormed off the set in a huff. Here’s Talking Points Memo:

"Ms O'Donnell wasn't happy about me quizzing her re views on withcraft and sex," Morgan tweeted. "But really flipped at gay marriage Qs. Ripped mike and fled."


Editor’s note: it was Morgan’s typo misspelling “witchcraft.” All I did was copy-and-paste the story.

Oh look, everyone, let’s have another hearty laugh at the expense of the wingnut attention whore who is so clueless that she doesn’t have the good sense to just go away after she’s been resoundingly defeated. HaHaHaHaHaHaHaHa…that bimbo is certifiably nuts, even if she is (ahem), you know, kinda HOT.

Sigh. When the hell are people going to wake up to the fact that the so-called “Worldwide Leader in News” puts this kind of garbage on the air as a distraction? Let’s examine for a moment who Christine O’Donnell really is…a three time loser for elective office from one of the smallest states in the union who has never received more than 40% of the vote in any of those contests. Any other politician with that kind of a sorry ass record would be completely ignored by the mainstream media. To put it in even better perspective, CNN barely pays attention to Ron Paul, despite the fact that he has won TEN congressional elections during his career and, whether you agree with him or not, actually has an idea or two in his head that aren't completely crazy.

What possible “news” value is there in broadcasting an interview with Christine O’Donnell at this point? It was maybe, perhaps excusable at this time last year when she was the nominee of one of the two major parties for the U.S. Senate. Once she was resoundingly defeated, however, she should have been shuffled off of the public stage and back into obscurity where she so rightly belongs.

Worse still is that the interview played out EXACTLY how I imagine that O’Donnell would have wanted it to. Had alleged “reporter” Morgan just sat there and asked her bland old questions about politics, the sound of teevees being switched off all across the nation would have been audible even in the studio and THAT wouldn’t have helped O’Donnell sell any copies her cheesy book.

Nope, by rehashing the tired old witchcraft stuff and goading her about sex issues, airhead Morgan gave O’Donnell an excuse to storm off the set. Suddenly, a routine interview that would have passed virtually unnoticed became “news” and O’Donnell’s wingnut fans who despise the so-called “liberal media” with every fiber of their being were no doubt fired up and motivated to go buy her version of Going Rogue even though none of them will ever likely read it.

So laugh it up, liberals and progressives. Pay no heed to the fact that your shrill mocking of Christine O’Donnell means nothing to her except money in the bank. She is Sarah Palin-lite, not because she has any real desire for power, but because like Palin what really matters to her is attention, fame and the money that comes with it. Instead of demonizing her, you should be directing your ire towards a media machine that insists upon presenting such idiotic spectacles in place of real stories examining just how the entire country now finds itself teetering on the edge of the economic abyss.
Posted by Bill Hicks at 8:30 AM