Hillary Clinton Would Have Been Better than Obama? You MUST Be Joking 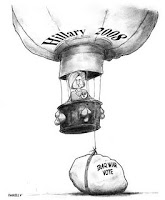 Many liberals and progressives were rightly outraged when Obama caved in to the Republicans and abandoned tax increases for the wealthy as part of the deal to raise the federal debt ceiling. Some called for a progressive challenger to take on Obama in the Democratic primaries, which is a reasonable response even if there is no chance that such a challenger could steal the nomination from President Hopey-Changey. Still others completely lost their heads and bemoaned that it was too bad Hillary Clinton didn’t win in 2008 because she knows how to stand up to Republicans.

The first problem with that assertion is these delusional fools have somehow failed to notice that the former first lady is an even bigger creature of Wall Street than is the Mighty O, and has been an insider for at least a couple of decades longer. Hillary’s record of cozying up to the big money boys goes all the way back to her 1978 sweetheart commodities trades that netted her a cool $100,000 back when that was still real money.

But if that isn’t enough to convince you, here’s a quote from a report that appeared on Tuesday in The Raw Story:


US Secretary of State Hillary Clinton warned Tuesday against budget cuts that could force an abrupt pullout of the US security presence in the Pacific at a time when China's power is rising.

The debate over reducing the US debt "does cast a pall over our ability to project the kind of security interests that are in America's interests," Clinton told officers at the National Defense University.

"We need to have a responsible conversation about how we are going to prepare ourselves for the future and there are a lot of issues that are not in the headlines but are in the trendlines," she said.

"We are asserting our presence in the Pacific. We are a Pacific power. That means all elements of our national security team have to be present," the chief US diplomat said in a conversation with Defense Secretary Leon Panetta.

"And we can't be abruptly pulling back or pulling out when we know we face some long-term challenges about how we are going to cope with what the rise of China means," she said in the conversation moderated by CNN television.

So suck it up, plebes, and don’t complain about those proposed cuts in entitlement spending. The Queen Bee of the Washington establishment has proclaimed that you will no longer be safe in your homes to live your pathetic little lives unless insane amounts of borrowed money can continue to be heaped upon the Pentagon in order to keep those vast Chinese hordes at bay.

Hillary’s statements clearly show once again just how out-of-touch with reality our so-called “leaders” really are. In my July 30th post, “Top Military Brass Cry Like Spoiled Children Over Proposed Cuts,” I wrote the following:


According to Wikipedia, America’s direct military spending in 2010 was $687 billion. That means we could slash such outlays by 75%, to $171 billion, and still be way ahead of the world’s number two nation, China ($114 billion)

As I also stated in that same post, the Chinese barely have a navy, let alone a gigantic invasion fleet ready to descend upon California the moment we let our guard down. So what Hillary is doing is nothing more than slavish Pentagon fear mongering—yet another version of the tired old argument that “we have to fight them over there or we’ll have to fight them over here.” Quite a change of heart for someone who was supposedly an antiwar hippie back during the 1960s, wouldn’t you say?

Once again, the biggest threat to America’s national security isn’t China; it’s peak oil-induced economic collapse. The day is coming in the not too distant future when an utterly bankrupt America will no longer be able to financially support our out-of-control military industrial complex. That by her statements Hillary Clinton shows no public awareness of this basic fact, she is either clueless or a liar. Either way, she has proven beyond all reasonable doubt that had she defeated Obama and won the presidency instead, the nation would be just as screwed as it is today.
Posted by Bill Hicks at 6:52 AM