If Wishes Were Horses… 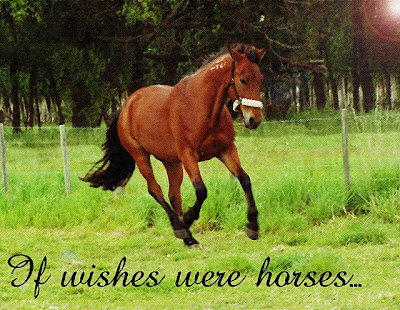 If wishes were horses then beggars would ride,
If turnips were swords I'd have one by my side.


So the debt limit debacle is over and we can all return to what it is we were doing before the whole spectacle of this past week. America’s ultimate day of financial reckoning has been pushed back for a little while longer. Both sides are returning to their corners to lick their wounds in preparation for the next round of battle, likely to commence in October with the Fiscal Year-2012 budget fight and yet another threat of a federal government “shutdown.”

Unless, of course, you work for the Federal Aviation Administration. They have already been on furlough since the weekend before last, at a cost to the U.S. taxpayer of a cool $200 million a week in lost revenues thanks to Republican intransigence. I read yesterday that Congress may split town for its August recess without addressing the FAA’s budget, meaning the furloughed employees will be out for another month at the cost of around a billion dollars. It’s hard to take a group of so-called “budget cutters” seriously when they are so wantonly willing to substantially increase the deficit to suit their own narrow anti-union political agenda.

But otherwise it’s all over but the teeth gnashing. Tea Party types, of course, are up in arms that the debt ceiling was lifted at all, but that was to be expected.

The reaction on the liberal and progressive side has been horror that the charlatan with the family right out of central casting from the old Cosby Show in whom they placed all of the naïve hopes and dreams back in 2008 sold them down the river by agreeing to entitlement cuts with no corresponding tax increases for the wealthy. The mainstream liberal and progressive stance is probably best reflected in a piece authored by former Clinton Labor Secretary Robert Reich on Monday entitled “Ransom Paid,” that included this little passage:


And through it all the President could have explained to Americans that the biggest economic challenge we face is restoring jobs and wages and economic growth, that spending cuts in the next few years will slow the economy even further, and therefore that the Republicans’ demands threaten us all. Again, he did not.

The radical right has now won a huge tactical and strategic victory. Democrats and the White House have proven they have little by way of tactics or strategy.

By putting Medicare and Social Security on the block, they have made it more difficult for Democrats in the upcoming 2012 election cycle to blame Republicans for doing so.

By embracing deficit reduction as their apparent goal – claiming only that they’d seek to do it differently than the GOP – Democrats and the White House now seemingly agree with the GOP that the budget deficit is the biggest obstacle to the nation’s future prosperity.

The budget deficit is not the biggest obstacle to our prosperity. Lack of jobs and growth is. And the largest threat to our democracy is the emergence of a radical right capable of getting most of the ransom it demands.

In that last paragraph, Reich gets it exactly right with his first two sentences and exactly wrong with the third. Lack of jobs and growth IS the biggest threat to our so-called “prosperity,” if you believe that the continuation of our mindless consumer culture and its corresponding damage wreaked upon the natural world represents such prosperity.

The problem is that the emergence of the radical right in American politics is not even close to being the largest threat to our prosperity or to our democracy. That exalted place is reserved for peak oil and resource depletion, followed closely by climate change, which combined will effectively prevent any sustained growth of the real economy (as opposed to the hallucinatory growth of the financial sector) ever again.

Some here may wonder why I have been so insistent in hammering the liberals and progressives during this whole fiasco. Quite simply, I consider the wingnut conservatives and tea party types to be a lost cause not worth annoying any precious electrons trying to convince of the folly of their thinking. But I would expect at least some liberals and progressives to be open-minded enough to see the truth through all of the ideological haze. After all, I have at least seen peak oil discussed on the Daily Kos, and not derisively either.

So here is my plea to the members of my former political tribe. Stop bemoaning the impending loss of the New Deal and Great Society programs. However well intentioned, they contained a huge design flaw in that they were based upon the assumption that indefinite economic growth in a finite world was not only possible but eminently desirable.

The conservatives are not the ones taking your candy away from you, reality is. Accept it, and then maybe you might be able to craft a coherent message that resonates with people because it has the truth on its side. The only chance we have of mitigating the onrushing disaster is to power down our society, not out of any namby-pamby desire to go “green” or to “save the planet,” but because we have no other choice.
Posted by Bill Hicks at 6:49 AM