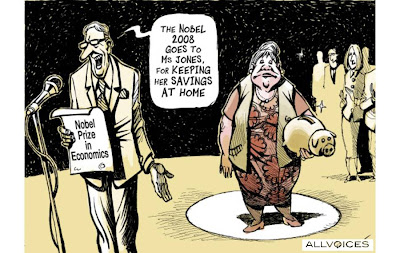 So, the ratings agency S&P withstood the political pressure from the Obama administration and took a very long overdue step in downgrading America's credit rating to a still very laughably high AA+. To put this in perspective, S&P is still giving its SECOND highest rating to a country with a national debt that exceeds $46,000 for every man, woman and child; and for the last three years has been adding to that debt at a rate of over $4,000 per person, per year. These are staggering figures that are difficult to grasp.

And yet, Nobel Prize winning economist, New York Times Columnist and all around liberal scold Paul Krugman threw a fit on his blog almost immediately after the downgrade was announced:

On the other hand, it’s hard to think of anyone less qualified to pass judgment on America than the rating agencies. The people who rated subprime-backed securities are now declaring that they are the judges of fiscal policy? Really?

Okay, Krugman has a point about the cruddy reputation of the ratings agencies, but then he goes on to add:


More than that, everything I’ve heard about S&P’s demands suggests that it’s talking nonsense about the US fiscal situation. The agency has suggested that the downgrade depended on the size of agreed deficit reduction over the next decade, with $4 trillion apparently the magic number. Yet US solvency depends hardly at all on what happens in the near or even medium term: an extra trillion in debt adds only a fraction of a percent of GDP to future interest costs, so a couple of trillion more or less barely signifies in the long term. What matters is the longer-term prospect, which in turn mainly depends on health care costs.

Ho-hum...to paraphrase the old Washington saying, "a trillion here, a trillion there, a pretty soon it adds up to REAL money."

Memo to Paul Krugman: there was NO agreement short of immediately balancing the federal budget that was going to ensure the "long term solvency" of the U.S. Moreover, health care costs, while soaring, also are in no way, shape or form the determining factor of our long term fiscal health.

The only way America could hope to service such an enormous pile of debt is if real, organic economic growth not tied to federal deficit spending were still possible, which it is not in this era of peak oil and resource depletion. You and other liberal and progressive pundits can scream about the impending dismantling of the New Deal and Great Society programs all you want. The fact is, that the national credit card is maxed out and we now have to start living within our means.

Once and for all, stop arguing that the answer to America's ills is taking on more debt. It's only making you look just as mad and extremist as those anti-tax Republicans you claim to abhor.
Posted by Bill Hicks at 11:42 AM