Rats in a Cage 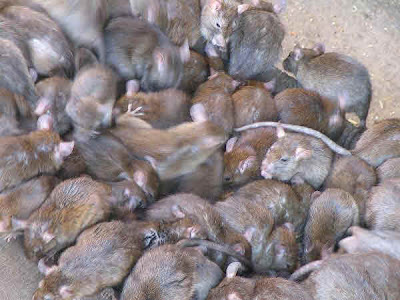 It is now a mere 24 hours before the deadline on the debt ceiling debacle. There is supposed to be a vote later today on the compromise agreement reached yesterday afternoon by each party's leadership that no one on either side is happy with.

Back on July 11th, I wrote in my post, “Why We’re Screwed (Part 1), Public Opinion Poll Regarding Entitlement Cuts” the following passage:


Every group is going to fight like a rabid Rottweiler to avoid their slice of the pie being cut, from senior citizens who rely upon Social Security and Medicare, to farmers who rely upon agriculture subsidies, to government employees protecting their salaries and benefits, to defense contractors who have grown fat and happy from lavish Pentagon spending. Meanwhile, the corporate elite who really run things will be continuing to transfer as much of the nation’s wealth as possible into their own hands.

The outcome of the debt limit fight is going to be very interesting to watch as what it really represents is the first time the country has been faced with making hard choices and can no longer “kick the can down the road” with the bill being paid by future generations. The outcome of the battle ought to give you some idea of just how ugly these kinds of fights are going to be in the future when the choices REALLY start to get tough. Let’s just say that I am far less than optimistic for any kind of positive outcome.

And that is exactly what has happened. No sooner had Senate Majority Leader Harry Reid announced that he had signed off on the deal and every interest group across the spectrum was howling betrayal. The core constituencies of both parties blasted their own leadership and are pressuring the rank and file in the House of Representatives to not go along with the compromise. The rats in the cage have come to recognize that there is no longer enough food to sustain them all, and have begun to tear into each other in the initial stages of what will no doubt be an epic fight to death.

Whatever the uncertainty about its passage, it looks like we're going to have the vote on the bill today since we've just about run out of time. No matter how it turns out, this whole mess has been an enormous blow to whatever esteem Americans may have still held for their leadership. Public opinion polls released this past week have shown all sides plummeting in popularity. Mr. Hopey-Changey himself has seen his approval ratings shrink to a mere 40%, and his base is particularly enraged that tax increases were taken off the table as part of the deal.

This is a very dangerous time for a massive loss of faith in the system, since that faith by the public, however misplaced it may be, is really all that is keeping the façade of business as usual propped up. By demonstrating for all the world to see just how broken American governance has become, our so-called “leaders” have brought the country to the brink of catastrophe for the sake of a compromise that even if it passes will do exactly NOTHING to solve the long term crisis.
Posted by Bill Hicks at 6:27 AM