Thousands in Georgia Line Up for Free Dental Services 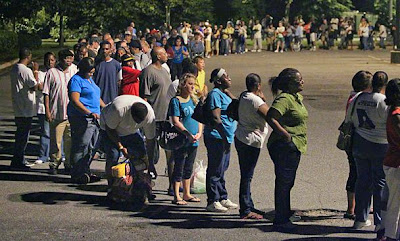 In yesterday’s post, I wrote about a poll showing that nearly two-thirds of all Americans could not even come up with $1000 cash in case of a personal emergency. In the post, I focused on the high costs of home and automobile repair. Even more challenging for many people, however, are unanticipated medical expenses. The uninsured are at particular risk, but even many who are lucky enough to have health insurance often find they have holes in their coverage that can easily lead them to being out of pocket by many thousands of dollars.

This is particularly true for dental care. I am one of those fortunate enough to have decent health insurance, and yet the dental coverage of my plan is virtually non-existent. Alas, I am just now reaching the age when the old filings I received as a child are causing my teeth to start breaking. Next week, I will be going in for the third time in the past two years to get a broken tooth replaced by a crown. The cost for each one of these procedures has been about $1500, and that’s without needing to have root canals, which would elevate the cost far higher.

So it was with great interest that I read an article that appeared in the Atlanta Journal Constitution this past Friday about this very subject. Here’s a snippet:


Thousands of people stood in line for free dental services Friday at a church in Woodstock.

The two-day clinic at First Baptist Church of Woodstock on Hwy. 92 is being sponsored by the Georgia Dental Association and its Foundation for Oral Health.

"The line went around the building, all the way through the parking lot and around a warehouse," said Dr. Richard Smith, who practices in Atlanta. He estimated the line at 2,000 yards and said that at its peak, 4,000 people were in line.

The article went on to say:


Dr. Michael Vernon of Augusta said he was moved by the patients' response to the massive effort.

"Two the first three patients that I saw actually sat in the chair and cried because they were so appreciative of what we're doing here and it just made me feel good about being here," he said.

First of all, let me give a big thumbs up to the church that arranged this charitable event in which around 300 dentists took part. It serves as a good reminder in these days when religious charlatans and haters like Michelle Bachmann and Rick Perry are running for President that there are still plenty of Christians out there who actually take Jesus’s teachings to help the poor and downtrodden seriously. Bravo to everyone involved.

I think we can all attest that there are few things in life less enjoyable than having a chronic dental problem. The pain can literally be debilitating. Sadly, like everything else in the health care industry, the costs of dental care have skyrocketed to the point where even the most basic treatment is now beyond the financial means of a substantial portion of the population. It would be nice to see events such as this one become far more commonplace.

As for me, once I have this latest broken tooth replaced, I know I have about six more that are also at risk and will go the same way eventually. I’ve resigned myself to the need to be proactive and get them all fixed now while I still have the financial means and modern dental care is still widely available. So there will be a lot more $1500 charges in my immediate future. Nevertheless, for me it’s money well spent.
Posted by Bill Hicks at 6:54 AM