Friday Rant: They Made a Biographical Movie About Sarah Palin, Michelle Bachmann and Christine O’Donnell – Back in 1995 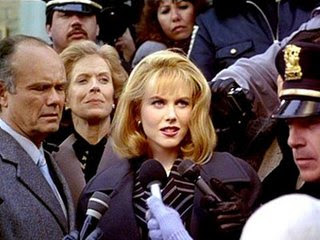 “You aren't really anybody in America if you're not on TV. On TV is where we learn about who we really are. Because what's the point of doing anything worthwhile if nobody's watching? And if people are watching, it makes you a better person.” – Nicole Kidman as Suzanne Stone Maretto, To Die For (1995)

There are certain movies that were way ahead of their time. Back in the 1970s, for example, the Academy Award winner, Network, predicted not only how the news media would become completely sensationalized, but also how big corporations were going to essentially erase national borders in their quest for global economic domination. Three Days to the Condor, meanwhile, predicted with great accuracy the extreme lengths that the U.S. government would go to in order to secure oil supplies during an era of encroaching resource depletion.

There are numerous other examples I could cite, but today I’m going to focus on such a film that often gets overlooked—Nicole Kidman’s 1995 acting tour-de-force, To Die For. Featuring easily the best performance of the Australian actress’s career, the movie uncannily predicted the rise of vacuous, attention-driven American politicians like Sarah Palin, Michelle Bachmann and Christine O’Donnell.

If you haven’t seen this visionary flick, let me just give you the synopsis right out of the Internet Movie Database:


Suzanne Stone (Maretto) knows exactly what she wants. She wants to be a television newscaster and she is willing to do ANYTHING to get what she wants. What she lacks in intelligence, she makes up for in cold determination and diabolical wiles. As she pursues her goal with relentless focus, she is forced to destroy anything and anyone that may stand in her way, regardless of the ultimate cost or means necessary.

Ummm…I haven’t wanted to sacrifice the number of brain cells it would take to slog my way through Palin’s hideous Going Rouge, but were you to just change the name in the above quote, that description sounds like it ought to be right on the damn dust jacket. At one point during the movie, Suzette even says, “It's nice to live in a country where life, liberty... and all the rest of it still stand for something.”

The scary part is that when I first saw To Die For in the movie theater back in the mid-1990s, I was chilled by Kidman’s portrayal of Suzanne but comforted by the thought that she was so transparently and ruthlessly ambitious that she could have only succeeded in a world of cinematic make believe. Well, here we are a mere decade-and-a-half later and one of Suzanne Stone Marretto’s spiritual heirs was the most recent Republican Vice Presidential nominee while another was just placed on the cover of Newsweek and is being treated as a serious presidential candidate. In an even more uncanny parallel, Palin herself was a sportscaster before she became a politician, while O’Donnell cut her teeth as a media figure by on appearing on MTV and as a frequent guest on Bill Maher’s old ABC show, Politically Incorrect.

What it really comes down to is that in modern America, with an imploding economy rapidly eroding the conventional avenues of upward mobility for the working and middle classes, the one remaining route to riches is to become famous. It no longer matters what you become famous or infamous for (just so long as you avoid serious prison time), only that you get people to pay attention to you. We’re a culture that gives out prime time television gigs to the likes of Snooki and Kate Gosselin while elevating manufactured musicians Miley Cyrus, Justin Beiber and Lady Gaga to the top of the pop music charts. People with real talent and creativity need not apply.

Regrettably, this slavish celebrity worship has spilled over from the entertainment world into our politics thanks to an electorate that puts more thought into who should win each season’s American Idol than who they are going to vote for in November. As a result, we’ve taken the next step down from the nepotism that allowed George W. Bush and Hillary Clinton to become national political figures, which was bad enough, to the point where fame itself is the only qualification you need to run for a major elective office. I mean seriously, I like Matt Damon, too, but I was appalled to read last week that he was being touted as a potential presidential candidate by people who weren't laughing their asses off when they suggested it.

I’ve written before about how the late author Joe Bageant used to refer to our media as The American Hologram, used by its corporate masters to keep the masses fat, dumb and complacent while the predatory elites steal their country right out from under their noses. It strikes me that the Hologram has now done its job so effectively that a vast majority of the population really believe, as Suzanne Stone Maretto said so memorably in the quote at the top of this page, that if people are watching you it makes you a better person.

With that lament, I leave you with an appropriate lyrical excerpt from the song “Go On Home,” by the greatly underrated singer-songwriter Chris Knight: