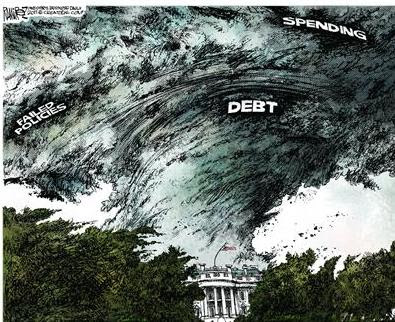 For the third straight fiscal year, the federal budget deficit has exceeded (cue Dr. Evil) One...Treeeeelion...Dollars. Here's the Huffington Post with the story:


The United States' budget deficit has topped $1 trillion for a third straight year, adding pressure on Congress and the White House to make more progress on a long-term plan to shrink the growing imbalance.

The Treasury Department said Wednesday that the deficit through July totaled $1.1 trillion. Three years ago, that would have been a record high for the full year.

This year's deficit is on pace to exceed last year's imbalance of $1.29 trillion. But it is likely to fall short of the record $1.41 trillion set in 2009.


To put this in perspective, never before Fiscal Year-2009, which began on October 1, 2008, just as the financial markets were imploding the first time around, had the federal deficit exceeded even a half-trillion dollars on an annual basis. Fiscal Year-2008, which ended on September 30th that year, was actually a record at the time--a paltry $455 billion.

Those who argue that "deficits don't matter"--from Dick Cheney to Paul Krugman--never acknowledge that the federal spending of the past three years has been absolutely unprecedented in our history. We've never tried borrowing money at a rate of over $4000 per person, per year, with no end in sight, so we really don't know what the long term effects will be.

Okay, scratch that. If you're reading this blog you likely have some idea, or at least more of an idea than do Messers Cheney and Krugman. The U.S. economy is now utterly dependent upon these insane levels of deficit spending. Take it away, and collapse would come fairly quickly. Of that there is little doubt. The question remains, as I've asked several times on this blog, when exactly will that day come?
Posted by Bill Hicks at 8:37 AM