Nearly Two-Thirds of All Americans Can’t Afford a $1,000 Emergency Expense 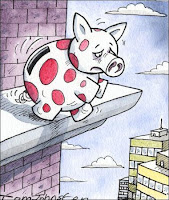 As I wrote on June 29th in my post, “High Gas Prices Are Changing People’s Behavior (Again),” I recently purchased a new car having traded in the old Ford Explorer I drove for nine years. Because I kept the old car for several years past the date in which the original warranties expired, I am well aware of the cost of auto repairs these days. Granted an Explorer is more expensive to fix than cheaper models and I live in a high cost of living area, but it seems like any major repair these days is at least $1000. In fact, the reason I finally decided to dump it despite enjoying having no car payments was because it needed two more major repairs and keeping it was no longer economical.

I’ve also noticed the same thing when it comes to major repairs around the house. Unfortunately, I’ve never been Mr. Fix-It, possessing the opposite of whatever the equivalent of a green thumb is for a handyman. It seems that when a major appliance gives up the ghost, or the roof needs to be repaired, or you need a new furnace, or whatever else $1000 is often the minimum amount needed to get the item fixed or replaced.

Keeping that in mind, I was rather distressed to see this story from CNN Money on Wednesday:


When the unexpected strikes, most Americans aren't prepared to pay for it.

A majority, or 64%, of Americans don't have enough cash on hand to handle a $1,000 emergency expense, according to a survey by the National Foundation for Credit Counseling, or NFCC, released on Wednesday.

Only 36% said they would tap their rainy day funds for an emergency. The rest of the 2,700 people polled said that they would have to go to other extremes to cover an unexpected expense, such as borrowing money or taking out a cash advance on a credit card.

"It's alarming," said Gail Cunningham, a spokeswoman for the Washington, DC-based non-profit. "For consumers who live paycheck to paycheck -- having spent tomorrow's money -- an unplanned expense can truly put them in financial distress," she noted.

That's the case for Allyson Curtis, 35. "I think about it every day," she said.

Curtis was unemployed for only three months last year, but in that time she accumulated $5,000 in credit card debt that she's now struggling to pay down. In the case of an emergency, Curtis said she would likely postpone other payments and pile on additional debt.

She is already putting off $450 in dental work and a car inspection due to a crack in her windshield, which will cost $300 to replace, she said.

I’ve seen numerous other recent news stories indicating that financially strapped Americans who have no savings have been using their credit cards to make ends meet. Obviously, they are also using the plastic whenever they incur emergency expenses. The fact that nearly two-thirds could not come up with $1000 for such expenses is yet another very troubling statistic. Cleary, tens of millions of people, even ones who are still lucky enough to be employed, are financially hanging on by the skin of their teeth. It wouldn’t take a very severe economic shock to knock them into poverty and destitution.

This is what happens when the economic policies of our “leaders” are designed to encourage consumption and discourage savings. For most of my lifetime until the past few years, you could place your money in a savings account and receive a decent if not spectacular return on your money. I distinctly recall back in the mid-1990s having a couple of thousand dollars stashed into a two-year Certificate of Deposit at my credit union at a whopping rate of 7% interest. Nowadays, thanks to the Federal Reserve’s Zero Interest Rate policy and other efforts to suppress rates so that the federal government can service its insane debt load, you’ll be lucky to pull down a percent and a half on a CD.

As a result, Americans ran out and did what they were being conditioned to do by the Hologram—spend, spend, spend—and the future be damned. Well, now the future is here and they are waking up to one hell of a hangover. It’s yet another example of Mission Accomplished by the clowns sitting in the driver’s seat who are pressing down on the accelerator as we collectively hurl ourselves towards the gaping abyss.
Posted by Bill Hicks at 8:21 AM