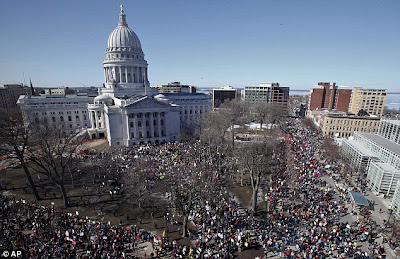 This is an addendum to this morning’s post about the union pension woes in Central Falls, Rhode Island. Remember this past February when, just as revolutions were sweeping aside autocratic regimes in Egypt and Tunisia, massive protests were also launched in Madison, Wisconsin, over Tea Party Governor Scott Walker’s ham-handed attempt to break the public employee unions? What a heady time that was. For a brief moment, the spirit of the 1960s seemed to reawaken as ordinary people took to the streets against “the man” in favor of social justice.

So how’d all that work out, anyway? Well, in short-attention span America, not too well as might have been expected. Rather than having their employees walk off the job and shut the state down until Walker backed down—while maybe encouraging their brethren in the private sector to do the same—the unions instead fixated upon a recall election scheme against the Republican state senators who voted for the union busting bill. The protesters put away their signs went home, and a political battle replaced the one that had briefly taken place in the streets.

Not surprisingly, the Republicans fought back by launching similar recall moves against Democratic senators, and the whole thing devolved from a passionate plea for fairness into an political farce. Here’s the latest from Talking Points Memo:


It is now the home stretch of the Wisconsin state Senate recalls, with six elections this Tuesday targeting incumbent Republicans -- which could potentially flip control of the chamber to the Democrats -- to be followed by two more elections targeting Democrats the week after. And the usually obscure world of state legislative races has seen a lot of money flooding into the state.

As the Milwaukee Journal Sentinel reports, the labor-backed group We Are Wisconsin announced that it raised a total of $9.7 million for the recalls. The numbers are not as clear on the other side, but the paper reports that conservative groups are estimated to have actually spent slightly more than the liberals on the elections, though not by a huge margin.

For example, the Capital Times reports that the Club For Growth's Wisconsin division has spent an estimated $3 million to $4 million on issue ads in the races -- compared to just $1 million they had previously spent in the state in the last four years.

So, in lieu of any real change, a whole lot of money was raised and blown to hold a bunch of special elections to determine which Tweedledee or Tweeledum party should control the State Senate, money I might add, that could have been put to much better use for…oh I dunno, just about anything. The only folks that should be happy about this fiasco are the teevee and radio stations that are being paid to run all of the content-free political ads.

A common question on peak oil and other alternative news websites is: when are people going to get angry and take to the streets? Well, they did that briefly in Wisconsin, but didn’t follow through and this is the result. The protestors allowed their energy to be redirected into an utterly corrupt political process that provides no real possibility for change. But hey, you can get back to your texting, Twittering, Facebook page and Daily Show episodes much quicker that way.

Make no mistake, even if the Democrats win all of these recall elections, and the voters of Wisconsin dump the hated Governor Walker next time around, the assault on union wages and benefits will continue. The Democratic officeholders jut won’t be so blatant about it.
Posted by Bill Hicks at 12:17 PM