Friday Rant: A Half-Century at the Local Tire Factory in a Globalizing World 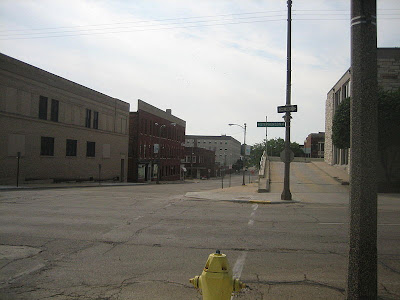 For most Americans who were alive at the time, 1963 was a traumatic year that saw the assassination of President John F. Kennedy and the abrupt ending of the 1000 days in the White House known as Camelot. Despite that tragic event, that year in my small Midwestern hometown there was great cause for optimism. The Goodyear Corporation was finishing construction of a brand new tire factory just beyond the city limits. Over a thousand good paying jobs were being created in a community that had just over 20,000 residents. Good times would surely follow.

One of the people who benefited immensely from Goodyear’s decision to build that plant among the cornfields was my father, who was recently married and had just been discharged from a two-year stint in the Air Force. The timing of the plant’s opening allowed him to return home and earn the kind of living that would enable my parents to raise a family in the place where they both grew up.

Being a college graduate, my father quickly worked his way up into middle management and became a personnel officer in charge of recruitment. In the 1960s, he used to caravan around the Midwest searching for workers to become tire builders at the plant. It was actually not an easy job. Many workers my father recruited would decide after a week or so that the physical demands of tire building were not for them. Employment was so plentiful back then that quitting wasn't a problem; they could easily find another job somewhere else the very next day. The local union was very powerful because of the strong economy, and was able to win numerous wage and benefit increases from the corporation.

My father’s service at the plant allowed my parents to live the middle class American dream. They bought a starter house in a brand new subdivision on the outskirts of town, and then traded it up for a larger model in town a decade later when the third of their three sons was born. Growing up in the 1970s, I was educated at good public schools and spent the long summers playing outside with the neighborhood kids. No video games or cable teevee back in those days.

My father’s career flourished for more than 20 years. He never aspired to the senior management ranks, but was loyal to the company and content with his lot in life. But trouble was to strike in 1986 when, in a scenario right out of the movie Wall Street, Goodyear was subject to a hostile takeover attempt by British financier James Goldsmith. The corporation managed to survive intact, but at the cost of $90 million being extracted from the company’s coffers.

The extreme financial distress led to a huge round of temporary layoffs, including my father. The company brought him back after the affair was over, but at a level of considerably reduced responsibilities. He hung on for another decade before taking early retirement in the mid-1990s, but his previous loyalty to the company had been virtually extinguished. Working at the plant became just another God Damn Job.

During the next ten years after his retirement, the plant slowly reduced the size of its workforce, and the local economy gradually worsened. A new Walmart was built on the outskirts of town, and the formerly vibrant downtown business district slowly withered and died. By the time I graduated from college it was evident that, unlike for my father, there were no good jobs available for me locally anymore, so I ended up starting my own career two hours away in Chicago.

Goodyear finally sold the factory to another corporation in 2005, severing its ties with my hometown after more than 40 years. Flashing forward to this past Christmas, the remaining work force at the plant, now reduced to about a fourth of its previous size, was locked out by management for two weeks until the union caved in and agreed to wage and benefit concessions. Management made it very clear that without the concessions the plant would be shut down for good. My father could only watch sadly from afar as these events transpired.

Meanwhile, the economy of my hometown was already in a state of virtual collapse long before the financial crash of 2008. A year before that event, there were two drive-by shootings in broad daylight downtown as gang bangers fought for control of the local narcotics trade. The previous home of my best friend from high school became a crack house and was raided by law enforcement. My own former home was boarded up and put on the HUD auction block for the pitiful sum of $22,000, and it was no longer safe to walk the streets of my old neighborhood after dark.

Many of those who are Peak Oil Aware constantly speculate as to what the future collapse is going to look like. I would argue that for a long time it is likely going to look a lot like what has been happening in my hometown for the past 20 years; a long, slow decay in which daily life just continues to get worse for most people as the jackals count their earnings from the dismantling the remainder of our industrial economy.
Posted by Bill Hicks at 6:44 AM