Half of All Americans Could be Obese by 2030 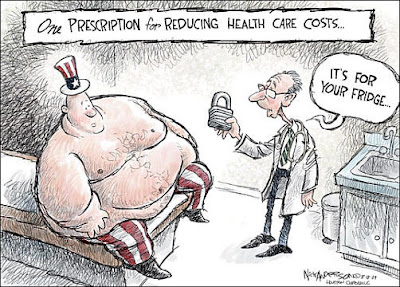 One of the primary purposes of this blog is analyze America’s near term future by examining current trends and extrapolating them forward. The premise is that the key turning point was the financial crash of 2008, which ushered in the initial stages of what author James Kunstler calls, The Long Emergency. My personal view is that The Long Emergency is going to take about a generation to play out, in other words until sometime in the late 2020s.

So it was with interest that I read a recent article in Business & Health about obesity in America and the likelihood that if current trends continue, half of all Americans could be obese by the year 2030—in other words right around the time that The Long Emergency is winding down. Here is a quote:


America is getting fatter: Half of all men and women in the United States could be obese in 20 years, according to a study by the Journal Lancet and reported by the Los Angeles Times. This could lead to 65 million more Americans being classified as obese.

So what might all of this have to do with economic collapse? The article goes on to state:

What could the rise in obesity mean? An increase in obesity could mean 8 million more cases of diabetes, 500,000-plus cases of cancer and 6.8 million cases of coronary heart disease in the U.S., the Times reports.

The ever-expanding waistlines could lead to higher healthcare costs, the study notes.

In my August 3rd blog post, “Spending on Medicare and Medicaid is Absolutely Out of Control,” I cited a recent USA Today article showing that annual Medicare and Medicaid costs have exploded by over $200 billion in just the past three years, and at their current rate of increase would top $2 trillion by 2021, or almost 100% of what the federal government took in from taxes this past year. With this article, we can clearly see that the obesity epidemic is one of the primary factors pushing up health care costs at such a rapid rate.

Putting aside for a moment the individual lifestyle choices that cause so many people to become obese, I think it is actually more illustrative to examine from a big picture standpoint WHY this is happening. Quite simply, it is because fat and sick people are more profitable to corporate America than are healthy ones.

Cheaply produced prepackaged food contains immense amounts of corn syrup and other fattening ingredients produced by agribusiness giants like Monsanto that are immensely profitable. Mega fast food chains like McDonalds, Taco Bell and Kentucky Fried Chicken’s whole business model revolves around selling convenience (and hence obesity) to the public. As for the health care industry (which author Charles Hugh Smith refers to as the "sick care" industry), it makes far more money by treating the people who eat the garbage produced by the food industry than it does those who try to stay healthy.

I often tell people that if you want to know why anything in American society is the way it is, particularly if it’s screwed up in some way, you need look no further than who is getting paid. Sure, the government has its silly little ineffectual campaigns encouraging people to eat healthy and to exercise. In fact, this issue seems to be of particular interest to our current First Lady.

But such messages are then completely drowned out by the 24/7 advertising barrage on teevee relentlessly pounding corporate America’s message that it is better to eat and consume all you can today and tomorrow be damned. Oh, and we’ll also sell you the medications that help deaden the unpleasant side affects of all that overconsumption. Plop, plop; fizz, fizz.

I suspect, however, that America will NOT in fact see the day when half of its citizens become obese. As the old saying goes, if a trend appears to be unsustainable, it probably is. The advent of peak oil, closely followed by peak phosphorous, means the impending end of the “Green Revolution” in modern industrial agriculture that enabled world population to double since the 1960s but conversely was a major contributor to the bloating of America’s waistlines. The likely sharp decline in agriculture production over the next two decades means that rather than obesity, by 2030 many Americans are instead going to be worried about where their next meal is coming from.
Posted by Bill Hicks at 6:45 AM