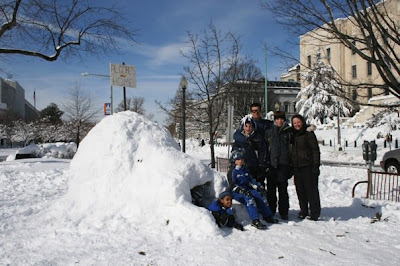 There are a lot of cretinous scumbags running around in Washington these days, which is pretty obvious given just how fucked up things are. Few, however, are in a league with the utterly contemptible U.S. Senator from the great state of Oklahoma, James Inhofe, who is perhaps the leading voice of Climate Change denial in Congress. Here's a little tidbit from Wikipedia to give you an idea of what this alleged human being is all about:


Inhofe had previously compared the United States Environmental Protection Agency to the Gestapo and he compared EPA Administrator Carol Browner to Tokyo Rose.

There he goes again with those completely inappropriate Nazi comparisons. Can we please, once and for all, put to rest the comparing of anything in modern American life to Hitler, the Nazis and/or the Holocaust? Because it is often painfully obvious that people who invoke such comparisons have little actual understanding of Nazi Germany beyond what they may have seen once on the History Channel.

Since Senator Inhofe clearly falls into this category, let me take a moment if I may to 'splain a little something to him. "The Big Lie" was in fact told in Nazi Germany by Josef Goebbles and his minions in the Propaganda Ministry, who had a total MONOPOLY on the entire German media. There was no ability to dissent from The Big Lie, and if you were foolish enough to try they hauled your ass away and threw you into a concentration camp. Just the fact that you, Senator Inhofe, are free to open your big fat ignorant yap about there supposedly being a "Big Lie," in connection to global warming without being bundled up and sent off to Guantanamo proves rather conclusively that IT DOESN'T EXIST.

(Deep breath) Sorry, I was getting a little hot under the collar there, if you'll pardon the pun. Back to the topic at hand.

So, according to the above quote by the "Honorable" Senator Inhofe, Global Warming doesn't cause a hot summer. Hmmm...I guess that would also mean that a cold or snowy winter wouldn't necessarily prove that Global Warming DOESN'T exist, either. Am I right? Only seems fair, doesn't it? So maybe Senator Inhofe would care to explain this little item that was published by CNSNews.com on February 10, 2010:


The family of Sen. Jim Inhofe (R-Okla.) had some fun at former Vice President and global warming spokesman Al Gore’s expense over the weekend after record snowfall blanketed the nation’s capital.

The family spent Saturday and Sunday building an igloo near the U.S. Capitol building, and the Oklahoma senator posted photos of their handiwork on his Facebook page. They added signs to the snow dwelling that read, “AL GORE’S NEW HOME!” and “HONK IF YOU (LOVE) GLOBAL WARMING.”

The Inhofe family, including the senator’s daughter and grandchildren, built the igloo after a large storm system dumped more than two feet of snow on the Washington, D.C. metro area on Friday and Saturday. The National Weather Service measured a record 32.4 inches at Dulles International Airport. Another 6 to 16 inches are predicted to fall on the capital on Tuesday and Wednesday.

HaHaHaHaHaHaHa - what a card that Senator Inhofe and his bunch of over privileged, snot-nose little progeny are. Don't they just sound like the kind of people it would be great fun to hang out and get an ice cream cone with?

Pay no attention to the fact that more moisture in the atmosphere, causing greater and more powerful storms, is one of the key indicators of Global Warming--nor to the fact that after each of those mammoth snowstorms, the temperatures in the DC-area rebounded into the 30s rather than plunging down into the teens and single digits like they used to do after such storms. Irrelevant trivia, all of that noise.

But hey, the troglodytes had their fun a year-and-a-half ago, and goody for them. Now it's time for me to have mine. This past week, I happened to run across a news item from the website The Extinction Protocol with this little quote:


Sweltering may have reached a new record last month, as Oklahoma racked up the country’s highest monthly average temperature ever. That’s the highest average temperature, for any month, for any state, associate Oklahoma state climatologist Gary McManus said. According to automated weather recording instruments, the state’s average for July was 89.1 degrees. That tops an average of 88.1 set in July 1954, McManus said.

The National Oceanic and Atmospheric Administration on Monday reported that last month was the fourth hottest July on record for the U.S. and that Texas and Oklahoma had their warmest months on record. “We’ve been beating temperature records left and right, from the 1930s Dust Bowl drought and the 1950s drought,” said McManus, who admitted that’s not the kind of record you put on a Chamber of Commerce promotion.

So to recap, Okalahoma's record for the highest monthly temperature ever recorded was just smashed by an astonishing one full degree Fahrenheit. And yet, there was nary a peep about it from the esteemed Senator Inhofe and his merry band of inbreds.

All of this almost makes me wish I lived in Oklahoma. During July I would have had this very strong desire to go find Senator Inhofe's house, wait until about four o'clock in the afternoon, and then break open a couple of eggs and fry them right on his front walk. Then I would have held up my own sign for all passersby to see: "Pray for Cooler Weather...Maybe that Will Help."
Posted by Bill Hicks at 6:58 AM