Spending on Medicare and Medicaid is Absolutely Out of Control 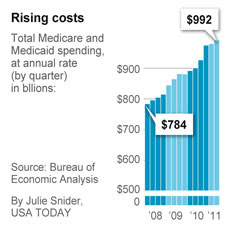 As a quick follow up to this morning’s piece about how liberals and progressives need to concede to reality and stop bemoaning the impending demise of the New Deal and Great Society programs that cannot be sustained in a resource depleting world, there was an article published today in the that graphically illustrates the exploding costs of Medicare and Medicaid, right into the teeth of the Great Recession:


Medicare and Medicaid spending rose 10% in the second quarter from a year earlier to a combined annual rate of almost $992 billion, according to new data from the Bureau of Economic Analysis (BEA). The two programs are on track to rise $90 billion in 2011 and crack the $1 trillion milestone for the first time.

The jump in health care spending is the biggest since the Medicare prescription drug benefit was added five years ago and ends a brief lull in the spending increases that occurred during the economic downturn.

The article went on to add:


The latest spending surge in federal health care is driven by more people getting more treatment, not by price increases. Health care inflation is at its lowest level in more than a decade — a 1.7% annual rate — but the aging population and the weak economy are sending more patients to government-financed care.

Medicare and Medicaid paid a record 57.5% of patient bills for hospital, doctors, drugs and other care in the last quarter, up from 49.3% in 2005.

The graph at the top of the page is from the same article. As you can see, going back to the first quarter of 2008, the quarter that marked the “official” beginning of the Great Recession, Medicare and Medicaid spending has in fact exploded by 21%, advancing a staggering $208 billion on an annualized basis during that time. Extrapolating that growth rate forward would cause such spending to double to nearly $2 trillion per year by 2021, the final year of the ten year time frame used in the just completed deficit reduction battle. Even scarier, that total is not far below the amount of revenue (around $2.1 trillion) the federal government took in from taxes last year.

Obviously, unless real, organic economic growth not tied to federal deficit spending resumes, these two programs are in big trouble. And that doesn’t even take into account that the Baby Boomer generation is just now reaching the point where its oldest members are becoming eligible for Medicare benefits.

Though the debt limit accord passed this week was hazy on real specifics, I think we can safely assume that whatever cuts are planned for Medicare and Medicaid will hardly curb this explosion in costs. Since we have reached a point thanks to peak oil and resource depletion where continued real economic growth is impossible, a genuine crisis in these programs (as opposed to the fake political crisis we just witnessed) is quite obviously not far away.
Posted by Bill Hicks at 1:37 PM