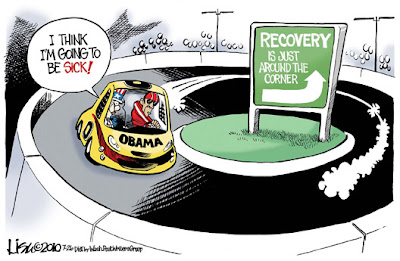 The most frightening aspect of the renewed market crash here in the U.S. is the realization that if we see a repeat of 2008 there will soon be another massive spike in unemployment as financially distressed companies again shed workers to try and ride out the storm. The problem is that during the first go-around three years ago the federal government had not yet spent itself to the brink of disaster. Regrettably, most of the increased deficit spending back then went to bail out the big banks and Wall Street. The only real help Main Street received was Obama’s $700 billion Recovery Act, which is now running its course just as the economy is apparently about to enter the second dip of the recession.

While the stock market carnage garnered all of the headlines late this past week, two news stories that appeared on Friday that tell the tale of the effects of the expiring economic stimulus from the Recovery Act. The first, from the Tacoma Tri-City Herald, is about layoffs at a radioactive waste cleanup site along the Columbia River:


The Department of Energy has authorized its environmental cleanup contractors at Hanford to lay off up to 1,100 more workers in the fiscal year that starts Oct. 1.

That's in addition to up to 1,985 layoffs already announced this year, the majority of which will be Sept. 29.

The layoffs announced earlier this year are mostly linked to the end of federal economic stimulus money. Hanford received $1.96 billion in American Recovery and Reinvestment Act money that should be mostly spent by Sept. 29.

The second story is out of Ohio from Columbus Business First:


As many as 700 Ohioans who worked to weatherize homes with stimulus funding could be laid off as the federal dollars run out, the Dayton Daily News reports.

Community action agencies writing to the state said the layoffs would take place by Oct. 31, adding that more than 250 of the 700 already have been cut. Ohio received $267 million in June 2009 under the federal stimulus program for weatherization and more than 1,000 workers were trained to update homes, the paper reported.

The Recovery Act was a typical Washington boondoggle, designed to throw massive amounts of money at a problem with little thought as to whether the taxpayers were going to get a good value for what was being spent in their names. It greatly contributed to the enormous imbalance in the nation’s budget that helped lead to the recent debt ceiling debacle in Congress.

All of that said, there’s also no denying that the program DID help arrest the precipitous downturn in employment that followed the 2008 market crash. As these two stories demonstrate, some Americans WERE put to work using Recovery Act funds whom without it would now likely be “99’ers” just falling off of the long term unemployment rolls.

We will likely know by the end of the year whether this new crash is going to lead to another massive bout of unemployment. If we start seeing the monthly jobs report printing at -500,000 or more again like it was during the first half of 2009, things are going to get really ugly out there, and given the current political climate there likely will be no second Recovery Act to help arrest the fall this time around.

It looks entirely likely that we are going to head into the presidential election year with the economy having resumed its free fall. The consequences of that happening, given how infantile the rhetoric coming out of the campaign has already been to date, can only be imagined.
Posted by Bill Hicks at 7:48 AM