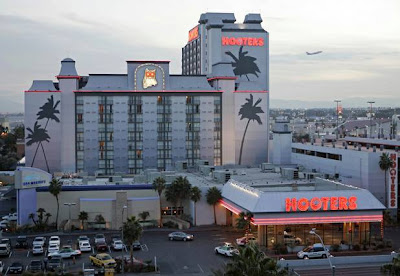 In the wake of the passing of the debt limit compromise, the financial news this morning is returning to the doom and gloom of an impending double-dip recession. One item that particularly caught my eye was from VegasInc.com:


The owner of the Las Vegas Hooters resort on Tropicana Avenue filed for Chapter 11 bankruptcy reorganization on Monday to block a threatened foreclosure — the latest in a series of financial debacles to hit the local casino industry since the onset of the recession.

The company, 155 East Tropicana LLC, in its initial filing in U.S. Bankruptcy Court listed assets of $10 million to $50 million against more than $162 million in liabilities.

Wow—more than $100 million in the red. They need to get some high roller suckers in there, pronto!

I discussed the woes of the gambling industry in my July 18th post, “America’s Domestic Oil Production Peak Presaged the Rise of Legalized Gambling.” No city’s fortunes have more dramatically illustrated that of the whole country during the bubble years than Las Vegas. Sin City benefited immensely from Americans’ pathological desire to get something for nothing in recent years even as their real wages stagnated. Easy credit allowed for the construction of ever bigger and gaudier casinos until the financial crisis of 2008 finally brought the big party to a screeching halt. Now the hangover is a real killer.

And really, what institution is more quintessentially American than Hooters, which built an empire on crappy food served up by comely young women in tight outfits? Sex appeal selling mediocrity—a technique that Madison Avenue has perfected over the past 30 years.

Dude, you know that hot chick in the orange shorts serving our drinks who has been flirting with you? I think she really likes you. Give her a big tip, willya?

This time, however, what happens in Vegas won’t be staying in Vegas. Bankruptcy and financial ruin will shortly be visited upon all sorts of commercial enterprises that exist for no other reason than to separate the suckers from their hard earned dough. Casinos, chain restaurants, fast food joints, big box stores, multiplex cinemas, outlet malls, Starbucks—all of these blights upon the landscape have business models based upon oil and gasoline being cheap forever and ever. As markers of our civilization, I doubt they will have the same archeological staying power as Stonehenge, the Pyramids, the Coliseum or the Parthenon.
Posted by Bill Hicks at 12:30 PM