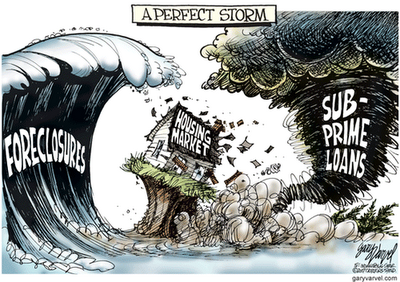 We're creating... an ownership society in this country, where more Americans than ever will be able to open up their door where they live and say, welcome to my house, welcome to my piece of property. - President George W. Bush, October 2004.

It's been well documented by now that after the Tech Bubble of the late 1990s finally popped as the new century dawned, our great and glorious "leaders" blew and even bigger and ultimately more destructive bubble in the housing market to keep the economy from crashing even harder than it did. Then-Federal Reserve Chairman Alan Greenspan lowered interest rates to near zero, regulators and ratings agencies looked the other way as massive systematic fraud took hold in the mortgage industry, and, as shown in the quotes above, our utterly vapid Cheerleader-in-Chief was sent out to relentlessly flack the idea of an "ownership society."

We all know what happened next. The larger bubble finally popped as the home building and mortgage industries ran out of greater suckers. The popping of the bubble took down Wall Street firms Bear Stearns and Lehman Brothers, and the resulting stock market crash ushered in the Great Recession. So in the wake of all that, how is the whole ownership society thing doing anyway? Here's a quote from a CNN Money report on Friday:


Yet, in a research paper issued a week earlier, Morgan Stanley analysts Oliver Chang, Vishwanath Tirupattur and James Egan argued that the home ownership rate is even lower than the Census Bureau statistics say.

In fact, once they factored in delinquent mortgage borrowers (the ones who are likely to lose their homes at some point), Morgan Stanley calculated that the home ownership rate is more like 59.2%.

That's the lowest level since the Census Bureau started keeping quarterly records back in 1965 (before that, it recorded home ownership rates once a decade). The Census Bureau's statistics, however, do not factor in mortgage delinquencies.

This is yet another example of the blowback that occurs when ideology and greed are allowed to trump all common sense. Bush and his followers may have really believed it was a good idea to give out half-million dollar subprime mortgages to people making $40,000 a year or less. After all, that way they could push their ownership society philosophy while their Wall Street buddies reaped the profits. A classic win-win.

The reason I assert that they may have actually believed their own bullshit is because it's not like any of them have ever had to make ends meet on a working class salary and would have had any idea what life is like for someone making $40,000 a year or less. If they did, they would have certainly recognized that their utopian visions of ownership for everybody were instead going to lead to an epic economic disaster.

From that same CNN report:


Prices have dipped 32% since they peaked in mid-2006 and interest rates on mortgages, if you can get one, are at or near historic lows. On Thursday, LendingTree reported that rates for a 30-year, fixed-rate loan reached a record low during the day: 4%.

When a 30-year, fixed rate mortgage at a mere 4% interest rate is not enough to induce people to buy houses, that's all the proof you need that the economy is in deep, deep trouble.
Posted by Bill Hicks at 6:45 AM