So, Even Sex Doesn't Sell Anymore? 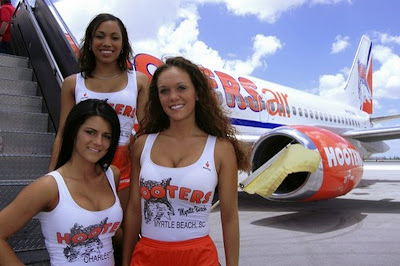 Exactly one month ago on August 2nd, I wrote a post about the bankruptcy of the Hooters Casino out in Las Vegas, and concluded:


This time, however, what happens in Vegas won’t be staying in Vegas. Bankruptcy and financial ruin will shortly be visited upon all sorts of commercial enterprises that exist for no other reason than to separate the suckers from their hard earned dough. Casinos, chain restaurants, fast food joints, big box stores, multiplex cinemas, outlet malls, Starbucks—all of these blights upon the landscape have business models based upon oil and gasoline being cheap forever and ever. As markers of our civilization, I doubt they will have the same archeological staying power as Stonehenge, the Pyramids, the Coliseum or the Parthenon.

So it was with great interest that today I read an article about the travails of the rest of the Hooters restaurant chain. Here is the Columbus (Ohio) Dispatch with the story:


A pair of Hooters has gone bust in central Ohio.

I just love it when the mainstream media descends into cheap double-entendres. That's supposed to be my job. Anyway, please continue:


Hooters is part of a concept in the restaurant industry known as “breastaurants,” which includes the Tilted Kilt and Twin Peaks chains, all of which feature scantily clad female servers.

The lingering effects of the recession have caused some consumers to rethink their spending on such concepts, said Mike Currier, director of operations at RestaurantMarketingGroup.org, a marketing firm in Orem, Utah.

Sales aren’t as strong “as they were five years ago, and being risque is only appealing to a small audience,” Currier said. “If I’m taking my family out to eat, I’m not taking them to Hooters.

Ummm...I should certainly HOPE you aren't taking the wife and kids out to Hooters there, Mr. Currier, though I'll note that I have actually witnessed a Hooter's-sponsored kids promotion at a minor league baseball game. Nevertheless, this statement is telling. If sex is no longer selling in this rapidly imploding economy, then we really are in deep trouble indeed.
Posted by Bill Hicks at 10:05 PM