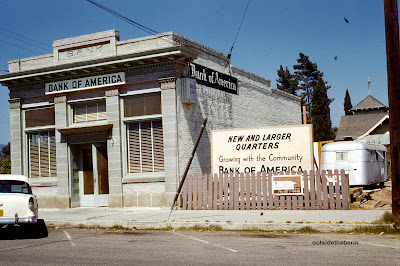 I didn’t conduct any research to confirm this, but during the last decade probably no commercial enterprises in America have enjoyed greater growth in the number of locations than bank branches and drug stores. Within just a few miles of my home here in Northern Virginia, for example, at least a half-dozen of each have sprung up during that time frame, and construction of additional locations was hardly slowed down by the effects of the Great Recession despite the banking crisis that started it all. It got to the point where I was no longer excited at seeing a new retail construction project being started around here, hoping it might portend the establishment of an interesting new restaurant or something. Instead, it almost invariably turned out to be yet another Walgreens, CVS, Capital One or PNC Bank.

So I was rather gratified to see a report that appeared on Thursday in The State newspaper of South Carolina concerning Bank of America’s plan to begin, if you’ll pardon the pun, trimming its branches:


Bank of America will close up to 600 branches as part of its reorganization and cost-cutting moves, according to multiple reports this morning.

Published and broadcast reports say Bank of America will split into separate consumer and commercial units, and that will lead to the branch closings.

Charlotte's NewsChannel 36 says analysts believe the decision to split into two units and close the branches is a signal that Bank of America CEO Brian Moynihan plans broader and deeper layoffs than those announced earlier this week.

I realize that this move is going to cost a lot of Bank of America employees their jobs, but I still can’t help but be gratified that it would appear reality is finally setting in for the big banks that their project to blight the American landscape by putting a branch location on every street corner is finally coming to an end. I will also never be accused of having a good head for business, but it never made any sense to me how this rampant construction could be at all profitable. Presumably, it costs a lot of money to acquire the land and build the structures, and then even more money for utilities and employee salaries. No wonder we’re lucky to earn 1% interest on our savings accounts these days.

Bank of America is, of course, in deep, deep trouble for reasons other than trying to pave paradise with the parking lots of all of its branch locations. Just how much trouble, no one really knows because the whole banking system is rampant with government-sanctioned fraud and obfuscation. Nevertheless, the specter of a BofA collapse hangs over the American economy like a faulty upstream dam bursting at the seams from a recent deluge. When it finally breaks, here's hoping that many ugly bank branch locations and even a few of those redundant drug stores will be permanently washed away.
Posted by Bill Hicks at 8:30 AM