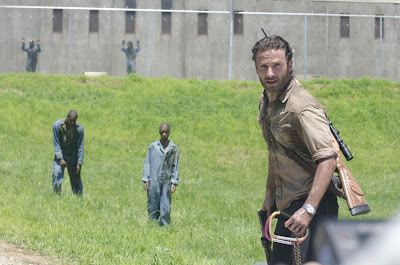 This past Sunday night I did something that was quite rare for me—I went along with the crowd and participated in the same activity as probably the greatest percentage of my fellow countrymen were at that particular moment. Specifically, I watched the Season 3 premier of everybody’s favorite zombie splatterfest, The Walking Dead. Amazingly, not only was it the highest rated cable teevee show, EVAH, but it even beat out the ratings of all three major networks during its time slot, to include an NFL game being broadcast on NBC.

I say amazingly because although I myself have been a bit a of a zombie aficionado ever since the first time I caught the original George Romero classic, Dawn of the Dead, on VHS back when I was in college, I never would have expected the zombie genre to (ahem) rise up and become anything more than fodder for B-movies and short story horror anthologies. It is one thing for a guy like me who grew up a horror fiction geek to (double ahem) eat this stuff up, but when my wife tells me as she did yesterday that most of her girlfriends were discussing the show on Facebook I feel safe in assuming that we are witnessing the emergence of a genuine cultural phenomenon.

If you haven’t yet watched the show, the one thing that cannot be said is that it’s a sanitized version of a zombie apocalypse. There are plenty of gruesome close ups of guts and gore of the type that not too long ago were restricted to R-rated movies. Sunday night’s premier was in fact one of the more violent episodes, climaxing with an in your face shot of one of the living survivors having his leg gruesomely amputated with a hatchet in an attempt to save him from the virus that causes the dead to rise.

Oh sure, you can gripe about some of the tiny details that the show gets wrong like, for example, the living survivors’ seemingly magical ability to execute perfect zombie head shots with their sidearms without ever missing, even at a distance and while running. Ever done a headshot drill at the firing range? I have, and let me tell you it isn’t easy to do even at close range while stationary, not under duress and with the target not rushing towards you determined to rip your guts out. Another quibble is how cavalier the survivors are about getting zombie gore all over them while fighting with swords and blunt weapons, even though the contamination of one little scratch on their skin could be a potential death sentence in that situation. And don’t get me started about Herschel’s “magic shotgun” in the last episode of Season 2. I know the man is a Christian and all, but the number of rounds that came out of that thing without reloading puts the old “loaves and the fishes” story to shame.

Nevertheless, these are mere quibbles. I came here to praise or at least analyze The Walking Dead, not to (ahem again) bury it. Take it from me, the show is worth your time if you are into good zombie stories, or if you just want to scratch your head for awhile and try to figure out just what the heck is going on with our culture.

We’re a nation that has become so good at lying to itself that most people are unable to recognize what the truth even is anymore. The Hologram of the American media spends 24/7 blowing sunshine up the skirts of the masses in an effort to convince them that everything is hunky-dory and that they should get their fat asses out to the mall and consume, consume, consume. Nearly everything in our popular culture, from “reality” television shows, to American Idol-ized music, to endless superhero action movies and dimwitted romantic comedies, to trashy “young adult” novels, are not only relentlessly aimed at the lowest common denominator, but almost completely crowd out any works of artistic quality with the seemingly specific aim of desensitizing those portions of the brain that engage in critical thinking and decision making.

The underlying message is quite simple: work, work, work so you can spend, spend, spend and we will all live in a more prosperous tomorrow with even more electronic gadgets to ruin our attention spans and keep us fat, dumb and if not happy at least not out rioting in the streets demanding change. And if you can’t afford it right now, the banksters will keep right on lending you the money so you can have your instant gratification while being tied by your debts even tighter to a system that is slowly destroying your health, your security and your future. Not that you’ll ever notice, because you are too busy worrying about the supposedly fierce rivalry between the utterly vacuous Mariah Carey and the even more vacuous Nicki Minaj, and if you start feeling depressed about all of this there are plenty of pills we can dope you up with to help you accept your lot in this disposable society.

Yet despite this gargantuan effort to anesthetize the masses, end of the world and dystopian visions have never been hotter as a form of mass entertainment. It all reached a crescendo this past year when The Hunger Games displaced Harry Potter and Twilight as the movie (and book series) the teenyboppers just HAD to see. Nowadays, there’s a version of the apocalypse for every audience and world view, from the Rapture fantasies of the Left Behind series to Colson Whitehead’s literary zombie novel for New Yorker readers, Zone One. And countless millions of people are no doubt holding their collective breath to see if the ancient Mayan doomsday prophecy comes true this December.

So why, in the face of all the propagandizing efforts to the contrary, have Americans become so obsessed with the end of the world? Could it be that many people sense deep down in their bones that we are teetering on the precipice of an epic civilization ending disaster even if they won’t consciously admit it? Perhaps so. You would have to have the emotional intelligence quotient of a slab of granite not to feel that SOMETHING has certainly gone wrong with our decadent and depraved society.

Interestingly, the marketers have caught on to the appeal of the apocalypse phenomenon. The Walking Dead premier itself had about six commercial breaks for all manner of useless products interrupting its one hour broadcast, which creates quite a jarring viewing experience especially since, as Romero recognized 33 years ago, zombies are the perfect metaphor for the mindless consumer. There was even a contest you could enter to win the brand spanking new Hyundai the living characters were driving during the episode. Nice to know that when the world ends, a Korean automobile plant will apparently be the only safe haven available anywhere in the world.

No doubt most people watching the show imagined themselves in the place of Rick and his plucky band of survivors, with no awareness that in the real world their behavior is much closer to the deadly horde, consuming all in their path in a desperate attempt to maintain their unsustainable lifestyles. The only difference is that there is not an elite group of puppet masters in the form of the oligarchs controlling the actions of the undead. All in all, I don’t know what is worse, that we so easily buy into a predatory system that is slowly killing us, or that we do so to enrich the very jackals who manipulate us into going along with it. But hey, on next week's show, Rick and the gang will surely finish clearing out that prison, and then maybe they at least will “safe,” if only for a little while.


Bonus: "I learned everything from George Romero"