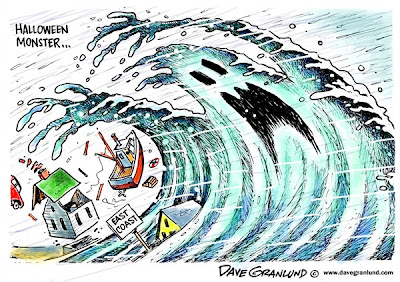 During the next 72 hours or so, the DC area is expected to get hit by Hurricane Sandy, a storm of unprecedented strength, fury and duration. As for me, I'm not terribly worried. I don't live near the coast, nor in any kind of a flood zone. I figure the worst that will happen is we lose power for a few days again, but that wouldn't be the first time that's happened even this year.

Because I don't expect it to affect me that much, my interest in this storm is more academic. I've been living in the national capital region for just over two decades now, which, of course, is also the home of most of the folks who have the power to actually do something to address the building crisis that is climate change. Amazingly, the DC-area has experienced more extreme weather events in the past three years than it did in my first 17 years of living here:


1). In February 2010, the area was hit by two massive Nor'easters in rapid succession which coupled with a third such storm the previous December to set a seasonal snowfall record. The three massive snow storms in just two months' time matched the total of three such storms to hit this area between 1993 and 2009.

2). In August 2011, Hurricane Irene struck the region before moving on to create catastrophic damage in Vermont and upstate New York.

3). In September 2011, Northern Virginia was hit with a record breaking one day rainstorm that caused a 1000-year flash flood in some areas.

4). In October 2011, almost exactly one year ago, the area was struck by the same massive Nor'easter that dumped over two feet of snow on portions of New England, though it was mostly rain here.

5). In March 2012, at the tail end of a record breaking warm winter, the DC area experienced the same freaky early summer type weather that blanketed much of the Midwest.

6). In June 2012, towards the end of one of the hottest Junes on record, the DC area was struck with a powerful derecho that knocked out power to over 3.7 million homes.

And yet climate change has been hardly mentioned at all during the presidential campaign and Congress will not even seriously consider any legislation that might be aimed at attempting to address it. If I were of a religious bent, I would almost be inclined to say that God is punishing the nation's capital for its sins of inaction. I know that may sound silly, but what the fuck, wingnut conservatives are always dragging His name into their political arguments so why can't I?

If nothing else, this storm is going to serve as a massive distraction from the horrible presidential election for a few days. Who said I don't know how to find silver linings?


Bonus: "Sandy, the angels have lost their desire for us...I spoke to 'em just last night and they said they won't set themselves on fire for us anymore"