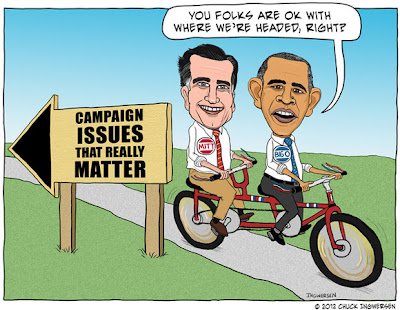 Sorry I didn’t post at all this past week, but I’ve been having a very difficult time coming up with anything new to say and I didn’t really start this blog just so I could repeat myself endlessly ad naseum. I did start to write a couple of posts, but ended up discarding them in frustration. The whole world, and the American political landscape in particular, seems stuck in an unfunny version of the movie, Groundhog Day, and we observers from the reality based community are like Bill Murray, forced to wake up each morning to the same cheesy classic pop song knowing that this day will be exactly the same as countless days before it. In other words, our civilization remains completely fucked but absolutely everyone in a position to do anything about it will continue to not only foil the consideration of any possible solutions, but will continue to refuse to acknowledge that the problem even exists.

Anyway, I got inspired to write this post by a couple of articles that Dave Cohen linked to over at Decline of the Empire yesterday fretting over the possibility that we might see a replay of Election 2000, which wasn’t decided by the Supreme Court in favor of Chimpy Bush until almost Christmastime that year. Here is the money quote that actually comes from New York Times columnist Maureen Dowd:


While I was watching Mitt Romney make up fantasy positions in the foreign policy debate, I had a fantasy of my own. And given the electoral isthmus the two men are wrestling on, it doesn't seem like such a wild one. There is growing buzz that the dead heat could slide into a deadlock.

Personally, I think it is more likely that we’d see a “too close to call” scenario play out in Ohio and possibly other states and a resulting replay of the excruciating Florida recount fiasco from 12 years ago. And all I can say about that possibility is I sure as fuck HOPE so.

Consider what this nation’s “leaders” are facing between Election Day and the end of the year even if the presidential race is decided cleanly. I’m talking of course about the so called fiscal cliff, which just to recap includes:


1). The need raise the federal government’s debt ceiling yet again.

2). Sequestration, which is an automatic 10% cut in most federal programs, unless Congress and the President agree to an alternative deficit reduction plan.

3). The (long overdue) expiration of the Bush tax cuts for the wealthy.

4). The expiration of Obama’s insane payroll tax holiday that is gutting the finances of Social Security.


Even in “normal” times, any one of these four issues would tie official Washington up in knots for weeks if not months. Instead, it will all play out in about seven weeks with a lame duck Congress and a possibly lame duck president, or if we are really lucky, ON TOP of the same post-election chaos involving the presidency that we saw back in 2000.

Get your popcorn, folks, because this is going to be the most entertaining spectacle to hit DC since “the bitch” set up former Mayor Marion Barry. Oh, and if we are all REALLY, REALLY lucky, it will take place amidst a region struggling to overcome a devastating blow to its infrastructure from Hurricane Sandy.

If I seem a little glib about all of this, it’s because after so many years of watching our "leaders" get crazier and more detached from reality, while the citizens of the country sit around passively with their thumbs up their asses in a teevee benumbed stupor, I’ve decided that what this Spoiled Rotten Nation really needs is a two-by-four smashed across the forehead. Sadly, even that will likely not wake most of the idiots up, but maybe if the economy takes a big enough hit there might start to be some dawning realization that business as usual, circa 2007, is dead as a doornail and is never coming back. If as a result, for example, even one high school senior decides NOT to mortgage his or her future getting an entirely worthless college education, it will have been worth it.


Bonus: The storm's a coming