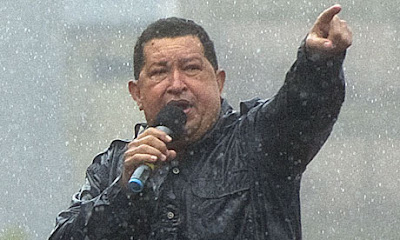 There is probably no website that better encapsulates the sheer venality and arrogance of America's supposedly "liberal" media establishment than the Atlantic Wire. Every day the Wire bombards its mostly liberal and progressive readership with the headlines its editors think are important, which could be anything from the civil war in Syria to economic collapse in Greece to the latest antics of Lindsey Lohan and Amanda Byrnes. Mixing real news with the utterly trivial as if each has equal importance is bad enough. But even worse is the site's routine asskissing of the rich and powerful and total conformity to the accepted conventional media "wisdom."

Case in point: yesterday the Wire ran the following headline in reporting the results of Venezuela's presidential election: "Of Course, Hugo Chavez Wins Another Term." Note the snide inference that the election results were not legitimate.

And yet, unlike the norm in most supposedly authoritarian countries, the election was actually pretty close:


In an election that was expected to deliver a record level of voter turnout on Sunday, the socialist leader garnered 54 percent of the vote, while his challenger centrist state governor Henrique Capriles got 45 percent.

Funny, but America has had presidential elections in which the final spread between the wo major party candidates was greater than 9%. So what was it that generated the insinuation that Hugo Chavez winning the race was a sham?


Fate was always on Chavez's side, though. Armed with Venezuela's war chest of oil money, he's spent the last few months launching massive giveaway programs that gave Chinese-made appliances to tens of thousands of poor Venezuelan families and promised the construction of 200,000 homes for the country's poor. "Since late last year, Chavez has been spending money like there's no tomorrow, and it's worked," one political analyst told The Los Angeles Times. "Most polls show his approval ratings are up 10 points since then." The government is on track to run a $60-billion deficit this year, by the way.

Gee, that horrible Chavez. What an inhuman monster he is for taking Venezuela's oil profits and instead of allowing a tiny group of politically connected corrupt billionaires to steal it all deciding to give it back to the people. And don't get me started about the absurdity of chastising Chavez for running a $60 billion budget defict when our own is around $1.4 trillion.

There are three things about the way the Wire reported this story that are notable. The first is the idea of a "liberal" news organ looking down its nose at a world leader who is not completely captured by the elite interests of his own country. Heaven forbid that the left wing party in Venezuela isn't beholden to the wealthy and the corporations the way the Democratic Party is in the U.S.--those silly third worlders and their quaint notions that having a real democracy means that the full political spectrum and not just the right of center should be represented.

The second thing that is notabale is that amazingly, only 5% less than a majority of Venezuelans actually voted against their nation's power structure. Compare that to the United States, where next month it is virtually guaranteed that at least 99% of the voters will cast their ballots for one of two oligarch-approved candidates whose positions are virtually identical on every issue of real importance. And yet the Wire has the audacity to insinuate that it is the Venezuelans who live in a sham democracy and not Americans.

And lastly there is the casual manner in which the Wire's headline reinforces the idea that America's reflexive anti-Chavez foreign policy makes any sense whatsoever and should be supported without question whatever your place may be on the political spectrum. It is one thing when some Fox News pundit rails against Chavez or cretinous teevee preacher Pat Robertson calls for his assassination, but it is another matter entirely when such propagandizing garbage is published in mainstream media outlets. What this tells you is that the establishment has decided that Chavez is an enemy of America (even though he continues to allow his county's oil to be sold to the U.S.) and dissenting voices which may question why there is so much demonization aimed at a leader who, whatever his faults, is far from being an evil dictator will simply not be tolerated. Certainly, by expressing such positions one is shutting themselves off from any hopes of ever advancing or having one's voice heard by more than a tiny minority of readers on the Internet.

Sadly, the American media has reached the point where it has no more credibility than did Pravda in the old Soviet Union. The difference is that I would bet that many of Russians KNEW that the information they were getting was pure bullshit, whereas you cannot say the same thing about the average American today.


Bonus: "The powers that be...They like a tough game...No rules"