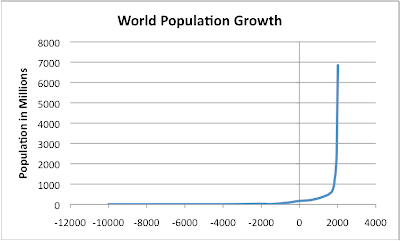 It was one year ago today, perversely on Halloween, that it was officially announced that World Population had broken the 7 billion barrier for the first time. So today I thought I would check back exactly one year later to see how many more people have been added since then. According to Worldometers.info, which calculates population growth based upon world wide census data, the total annual increase in population since last Halloween is around 76 million.

We keep hearing in the media that population growth rates are gradually dropping around the world and that the total numbers will cap off at around 9 billion by midcentury. This seems unlikely, for even if the growth rate does continue to incrementally decline enough to keep the increase in raw numbers fairly stable (around 75 million per year) over the next few decades, the world would see its 8 billionth living human in the year 2026 and its 9 billionth by around 2040. By 2050, we would be closing in on the 10 billion mark. If the growth rate itself stabilizes and stops declining at any point in the next few years, 10 billion by midcentury is virtually assured. Sometimes, mathematics can really be a bitch.

Of course, this hypothetical game of playing with the numbers assumes that there will be sufficient energy, water and food resources to sustain several billion additional people. Given that the signs are already there that we are approaching the limits of the total resources the world can produce on an annual basis, and that furthermore the amount of resources produced annually is very likely to go into decline as soon as this current decade, at some point continued population growth is going to slam headlong into the brick wall of natural limits.

I gather that none of this is likely to be news to anyone who reads this blog regularly. It is just something to contemplate the next time some optimistic media report claims that human population growth is going to be curtailed at a sustainable level at some point in the coming decades.


Bonus: "Cause everyday is Halloween...it's everyday"