The Truth About Climate Change? It's All in a Name 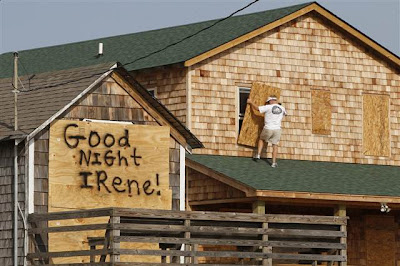 The power is still on here in my little corner of NOVA. If we make it through the night, we might just be among the lucky ones. The DC area as a whole has fared quite well as "only" a couple of hundred thousand people have lost electricity to this point with the worst of the winds expected to start to die down in a few hours. I guess the power companies around here actually learned something from last summer's massive derecho.

Anyway, in between being glued to the incredible updates coming out of NYC and surrounding areas tonight, I idly checked the National Hurricane Center's list of retired Atlantic basin hurricane names in the assumption that Sandy will be soon joining it. In looking at the list, something suddenly struck me. As you know, the annual hurricane names list goes in alphabetical order, so the further down the alphabet, the later the number of that year's storm. The list began in 1954, but prior to 1995, Hurricane Janet, a "J" storm, was the furthest down the alphabet to be retired.

Amazingly, since 1995, by my count Sandy will be the 17th storm to be retired whose name begins with a letter later than "J," including notorious blowouts like Katrina, Rita and Wilma. That means that not only are their more total hurricanes and more destructive hurricanes than there used to be, but they are coming later in the season than ever before. And yet I will bet you right now that the giant black eye Sandy just delivered to DC, NYC and most points in between still won't be enough to break the total political inertia on combatting climate change.