Ha-Ha! Obama’s Drug War Betrayal Might Cost Him the Election 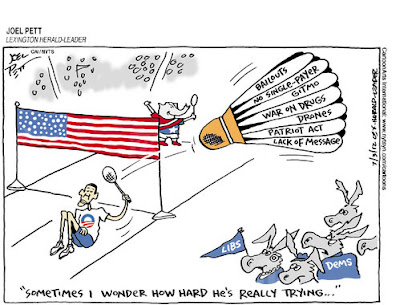 Though the national media has made the unilateral decision to ignore the massive and destructive Drug War, Johnson and his supporters clearly see the issue as a perfect opening for maximum local — and by virtue of the Electoral College, national — impact. They can make a full-throated libertarian case against the Drug War in a state whose politics are uniquely aligned to convert that argument into an election-winning game-changer for the Republican presidential nominee.

Is this a brilliant GOP conspiracy theory? In other words, is the libertarian candidate deliberately trying to help Romney, as Obama partisans will no doubt grouse? Almost certainly not, as Johnson is no fan of Romney, to say the least. He has run a consistently honest and principled campaign that has been equal — and equally harsh — in itscriticism of both parties. For that, despite being on most state ballots, he has been mercilessly shut out of the national debate by America’s bipartisan Political-Media-Industrial Complex. But apparently not shut out enough to potentially shift the outcome of the entire 2012 election.

No, if Obamaphiles have any grievance over the Johnson Effect in Colorado, it should be with their candidate. He was the one who needlessly betrayed his own position on the failed drug war, a position that almost certainly got him votes in 2008 from disaffected Republicans and libertarians. He probably made the same calculation as the national media: He probably believed few care about the Drug War or his drug policy reversals, and that the brazen reversals might even win him votes by making him look “tough.”

But, then, every now and again, such cynical calculations can end up being epic miscalculations, especially when it comes to lying to a motivated subset of voters. In that sense, nobody should be surprised that having been betrayed, many of those Democratic-leaning voters who supported Obama in 2008 specifically because of his position on the Drug War may look for an alternative in 2012. The only thing surprising is that thanks to Colorado’s perfect storm, there’s now a very real chance that the alternative could end up changing the entire course of history.

I’m not the biggest fan in the world of Gary Johnson, and interestingly his positions as plotted by political compass.org barely place him on the libertarian end of the political scale, but I swear if I could I would move to Colorado, register and vote for him if I thought it would help the election play out the way Sirota supposes. Might the Democratic Party then finally get the message that “sellout politics” is a long term loser? Probably not. Instead they will no doubt try to tar and feather Johnson as 2012's version of Ralph Nader. But it is nice to fantasize about.


Bonus: "Ball-less, soulless, spiritless, corporate little bitches, suckers of Satan's cock...each and every one of them"