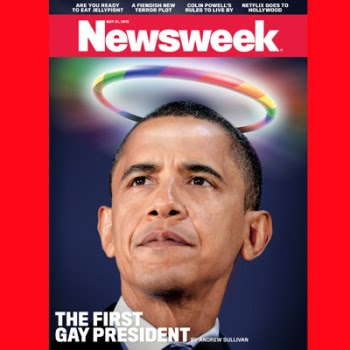 In a rather stunning development, it was announced yesterday that Newsweek magazine will cease publishing in hard copy at the end of this year:


In a momentous (though not totally unforeseen) development, Newsweek editor Tina Brown announced this morning that the magazine will move to an all-digital format and shutter the print edition just shy of its 80th birthday. In a post on the magazine's website—which Brown folded into TheDailyBeast.com in 2010—she unveiled the new online-only plan for an once-iconic magazine that first began publishing in February of 1933. The magazine will be renamed Newsweek Global, focus on paid subscriptions, and ramp up the importance of e-reader and tablet editions. The last paper issue will be published on December 31.

Brown's post was a modified version of an internal email that also warns employees about anticipated layoffs and restructuring.

The eventual fate of the Newsweek brand appeared inevitable after the merger with The Daily Beast in 2010, which even included the loss of its URL. The entire concept of weekly news magazines has become outdated, as has the economics of print media in general. IAC chairman Barry Diller (who owns half the company) even hinted that this might happen the summer, though he quickly backpedaled on the idea that the print side would shut down completely. However, Brown's strategy seemed to continually push the Newsweek half of Newsweek/Daily Beast to the back burner—when she wasn't cooking up desperate, attention-seeking covers. It was becoming harder and harder to imagine a world in which the magazine might thrive again, but perhaps few expected the end to come soon or so abruptly. Brown writes that she's looking ahead to the "the 80th anniversary of Newsweek next year," but now that day will be more like a funeral.

Notice how the article above tries to write this off as inevitable “progress” when in fact it is anything but. It isn’t just that Newsweek will no longer offer a dead tree edition, but that one of America’s most trusted news sources had already been virtually destroyed as a reliable source of information through the efforts of the utterly vacuous Tina Brown. First she dumbed down the content in pursuit of the lowest common denominator, and then she further degraded the brand with those “desperate, attention-seeking covers.” Perhaps that was not the wisest strategy at a time when virtually every other news media outlet was essentially doing the same thing. Why would any reader plunk down the cash for a copy of Newsweek just so they can read the same sort of shallow coverage and frivolous celebrity worship they can get anywhere else?

The merging of Newsweek into The Daily Beast is particularly regrettable. That website is one of the very worst on the Internet for the way it mixes stories of real importance with the utterly inane and presents it all with ads and pictures of celebrities splattered across every page. While writing this story, I did a quick check of The Daily Beast’s front page, and just by a selection of the posted headlines you can tell how horrible it is:

Angelina Jolie: We Are All Malala

Can Single Ladies Save Obama?

All of the above garbage was mixed in almost at random with stories about Syria, the attempted bombing of the Federal Reserve and some more substantive stuff on the presidential campaign. This manner of presenting the news could not be more insidious, for it implies to the reader that all of that sheer fluff is of at least equal importance to the genuine news stories. This same phenomenon is happening all over the Internet, of course. Just the other day, I was reading a crime report on local news website. Halfway down the page, the text was interrupted by a big picture of actress Megan Fox showing off her shoulder tattoo with the headline “Celebrity Ink” and a link to a story that I would assume was of zero news value (obviously, I didn’t click on the link). It’s as if every news source has become the National Enquirer. No wonder hardly anybody in this stupid country has any attention span left anymore.

So while I won’t particularly miss Newsweek, at least not the hollow shell of a real news outlet that Newsweek had become in recent years, I do very much lament the relentless ongoing trend of our national media becoming ever more superficial and content free. That is the real importance of this story, not whether a few trees are saved next year when it ceases publication.