The Most Ironic Nobel Peace Prize Yet? 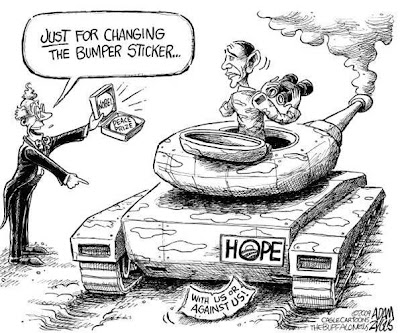 Remember back in 2009 when Obama was awarded his "Affirmative Action Nobel Peace Prize" in the hopes that he would reduce America's warlike belligerance around the world, only to have President Hopey-Changey wipe his ass on the medal before ordering the Afghanistan surge and stepping up drone missile bombings of innocent civilians? Well, that hideously misguided decision looks like the paragon of wisdom next to this year's choice:


The European Union won the Nobel Peace Prize on Friday, a choice that celebrates Europe’s post-World War II economic and political integration but comes as the 27-nation body confronts widespread criticism over its handling of a massive debt crisis that is by far the biggest challenge of its existence.

The award honored the struggle in Europe to not only hold the union together in the wake of the debt crisis, but also to deepen integration across a vast swath of the region stretching from the isles of Greece to the Scottish Highlands, from the ports of Portugal to northern Finland.


To say this was a less than popular move is a bit of an understatement:


The choice elicited audible gasps from a roomful of journalists who attended the announcement in Oslo. The union has been accused of being slow and overly bureaucratic, and of foisting onto its heavily indebted members a crushing austerity that has crippled domestic economies and sparked social unrest in nations such as Greece and Spain.

“Twenty years ago, this prize would have been sycophantic, but maybe more justified. Today it is downright out of touch,” said Martin Callanan, a Conservative British politician and chairman of the European Conservative and Reformists Party in the European Parliament. “The E.U.’s policies have exacerbated the fallout of the financial crisis and led to social unrest that we haven’t seen for a generation.”

The peace prize decision fed into complaints that the Norwegian Nobel Committee increasingly has strayed from the award’s original ideals — including when it honored President Obama in 2009, just months after he took office. Some critics said the prize is venturing deeper into the realm of political theater.

“It’s just laughable,” Svetlana Gannushkina, a longtime Russian human rights activist whom Norwegian parliamentarians said they had nominated for the award, told Interfax. “The award has been depersonalized to such an extent . . . The Nobel Committee could have defended the principles of peace and democracy if it had awarded the prize to those who have worked in this sphere for many years and now need support.”

The blockheads really don't get it, do they. Europe in 2012 is poised about where it was in around 1932 or so. The economies of many of its member nations are in free fall, the political "leadership" is weak and divided and ugly nationalism and xenophobia are starting starting to rear their ugly heads again.

If what the global economy is experiencing were just a run-of-the-mill post World War Two recession, one could maybe shrug what's happening in Europe off as being of no long term consequence. But it's not. Not only is the global economy on the precipice of a major economic catastrophe, but Europe is particularly fucked because what oil reserves it does possess are rapidly depleting and will likely run out completely within the next couple of decades just as the Export Land Model (rising demand combined with falling production in oil exporting nations) makes oil virtually unavailable on the world markets. Combine that with a population that is largely accustomed to living a middle class lifestyle with a generous social safety net and you have the recipe for a continent-wide conflagration that could well dwarf even World War Two in its destructiveness.

My prediction is that 100 years from now historians, assuming there still are any, will be able to only shake their heads in wonder and disbelief that the Nobel committee awarded its 2012 Peace Prize to the very entity which was just about to fly apart and experience perhaps the mother of all resource wars.