So Just How Far am I Outside the Political Mainstream? 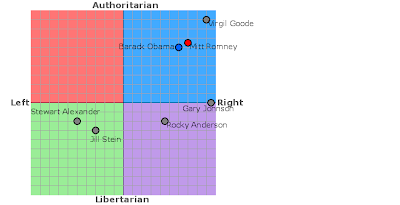 With the U.S. presidential election coming up, I thought I would revisit the website political compass.org and take their little test again like I did back in 2008 to see how my views match up with those of the presidential candidates. First of all, a little background: though the test is not perfect (for example, I wish one of the standard answer options was "neither agree nor disagree"), it is interesting because it purports to give you an idea where your politics lie not only on the traditional "liberal-conservative" scale but also an "authoritarian-libertarian" cross scale.

As you can see by the chart above plotting the positions of those running for president this year, there is very little distance between President Hopey-Changey and Governor 47%-er--just as I've been writing on this blog ad naseum for about a year-and-a-half now. And what should surprise exactly no one is that both of them are at the extreme conservative and authoritarian ends of the two scales. Not a shocker for the two men who aspire to lead a global empire which enforces it hegemony through the use of brute force and globalized neoliberal economic exploitation.

So where do I stack up against the two main assholes running for president? Well, see for yourself: 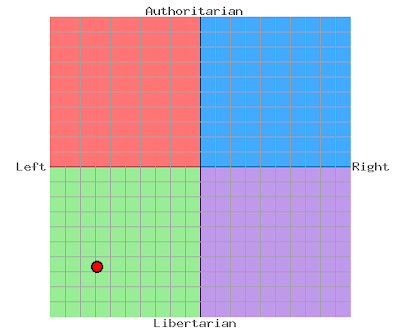 Holy crap. I'm so far from the political mainstream that Green Party candidate Jill Stein looks like a jackbooted thug in comparison. Interestingly, from what I remember about my results from taking this test during the 2008 campaign I have moved both leftward and downward several notches since then. From what I gather by how the questions are asked, my position on the scale is reflective of someone who believes that government should smash the power of corporations while leaving individuals to live their lives in peace--probably not the most practical of positions. Now I know why it feels like my head is going to explode whenever anyone--Republican or Democrat, liberal or conservative--starts talking politics around me.