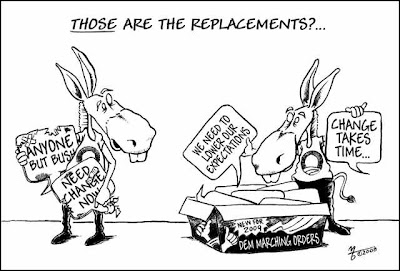 So let's say you are the supposedly "liberal" party in a two-party system that has been completely captured by the billionaires and big business interests. What's more, let's say that the country this is taking place in is seeing the disparity in incomes between the rich and everybody else skyrockting to levels not seen since the Gilded Age. And yet, for some mysterious reason you still seem to have difficulties get your base (i.e., the non-rich) to turn out on election day. What do you do? Do you craft policy positions that might appeal to them so that they have a reason to get out of the house on election day? Of course not. Someone on the right might call you mean names like "socialist" or "communist," and many of those rich scumbags you grovel to for campaign donations might decide to start giving their money to the other guys.

Wait, I've got an idea. If you can't get 'em to go to the polls with your positions, pass laws that FORCE them to vote. Everybody (well, at least your side) wins! Here is blogger Simon Liem of Harper's Magazine with the wacky proposal:


Presidential-election voting peaked in the twentieth century in 1960, when nearly two-thirds of eligible voters came out to the polls, and reached its nadir in 1996, when just over half did. The most recent two presidential elections were better, with each turning out over 60 percent, but the most recent midterm elections managed only 40. Given that it has become a struggle to get half of Americans to the polls, it’s quite incredible that anyone would do anything to discourage voting.

This has become a particular problem for Democrats, who, if they were wise, would be targeting nonvoters with more than just get-out-the-vote drives. In August, a USA Today/Suffolk University poll showed that unregistered voters, if they had to choose, would pick Obama over Romney at a rate of nearly two to one, while registered voters who said they weren’t sure if they would cast a ballot also heavily favored Obama. The pool of 90 to 95 million nonvoters represent a significant missed opportunity for Democrats, one they might someday capitalize on by pushing to aggressively reform voting laws around the country, a strategic goal that happens to coincide with increased participation in the democratic process. Allowing same-day registration and a variety of acceptable identifications at the voting booths helped Minnesota achieve the highest turnout of any state in the 2008 presidential election, at 77 percent, while Democrats in California have passed laws that allow for online registration in the upcoming election, resulting in promising early numbers. But to really push people to the polls would require much more.

The most obvious and effective reform would be a compulsory voting system. While such a move would invoke the rage of tea partiers and those who see compulsory anything as inimical to the American notion of freedom, the concept isn’t foreign to U.S. politics. In the seventeenth century, several American colonies required eligible voters to participate in elections. (In Virginia, the fine for not voting was at one point two hundred pounds of tobacco, while Georgia wrote into its first constitution a fine of five pounds for anyone who absented himself from an election without valid reason.) More recently, many delegates to Massachusetts 1917 constitutional convention supported amending the state’s constitution to permit compulsory voting. Turnout had been backsliding in the United States from its highest historic participation rates in the late nineteenth century, and was heading for its all-time low in the 1920 presidential elections. One of the Massachusetts delegates argued that “when these men find it obligatory on them to go and vote they are going to give this question thought, and they will study it over, and they will talk it over in the market-places and in the grocery stores and with the folks at home, and the result is they get more light and are better able to vote.” Another complained that 28 percent of registered voters had not voted in state elections that year, and that primaries regularly drew less than one-quarter of voters—turnouts that would be nothing short of miraculous today. The trends were troubling enough for drafters of the constitution to add the amendment permitting the government to require voting, though no law has yet been passed to test it.


It would be in the Democrats’ interest to push in that direction—and at relatively low cost, as reform would first have to happen slowly on a state level, where, if other systems are any example, the success and popularity of compulsory voting would serve as a model that could spread through the country. The biggest challenges would most likely be legal ones—because, as Bassetti points out, the lack of a federal constitutional right to vote makes standards flexible and essentially subject to the whims of state courts.

First of all, let me start out my response to this lunacy by pointing out the obvious: it ain't ever going to fucking happen. I really would like to ask Simon Liem what country he thinks he is living in if he also thinks that such a proposal, once made by any Democratic politician of any prominence, would not cause such a right wing backlash and media shit storm as to be immediately dead on arrival.

But more importantly, this is an incredibly stupid fucking idea because it basically acknowledges that the Democratic Party has no hope of ever appealing to non-voters because it is so utterly compromised by being totally in bed with the same corporate interests as the Republicans. And if that is the case, why should we force people to go to the polls to vote for the same old shit they are going to get no matter who wins? That's the same type of crap they used to pull in the old Soviet Union. And I have news for you Simon, if you force me to go to the polls, I'm not going to punch the button for your great Democratic savior, but instead write in "Mickey Mouse," "Wydon Jablomie," "Fuck Bill Clinton" or some other such nonsense.

The appearance of this bit of lunacy in Harper's the very day after one of their other bloggers implored his fellow liberals and progressives to help "push Obama over the finish line" despite President Hopey-Changey's apparent disinterest in being reelected just shows how desperate Democratic partisans are becoming. They know damn well their party is hopelessly compromised and should be abandoned altogether, but they just can't bring themselves to admit it. Just another sad example of how partisanship is yet another form of brain damage.


Bonus: "Got to keep the loonies on the path"