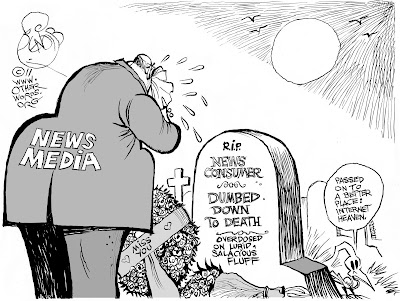 I've taken my shots at dipshit Atlantic Wire blogger Jen Doll before, but she really outdid herself in the wake of Hurricane Sandy. This morning, as New York City was awakened to the grim spectacle of severe damage from the storm, including flooded subways, collapsed building facades, crippled construction cranes, an evacuated hospital, exploded transmitters, a spectacular waterfront fire and at least a dozen casualties, Ms. Doll decided to focus on what was really important: New Yorkers who won't be denied their Starbucks under any circumstances:


Before the store closed Monday afternoon, there was a "daylong stream of customers that packed the store, standing shoulder to shoulder and waiting at least 10 minutes to order." One self-described Starbucks fanatic walked 20 blocks to find an open store. Another had her driver bring her to the shop. The threat of all of the Starbucks closing was, to some, more terrifying than the threat of Sandy:

“I didn’t know they were all going to close. I started panicking,” Hernandez said with a chuckle.

“It was scary not having Starbucks,” said Owings, who orders tea, not coffee.
Said another: “I’m really happy these guys are open. I can’t get a pumpkin spice latte anywhere else."

Some people really need to, um, buy a coffeemaker.

But wait, if you think that was bad, consider Ms. Doll's snarky last sentence in light of her long post last Thursday mocking Hurricane Sandy preparations called, I shit you not, "How to Feel About Snoreastercane." This is just a snippet of the sheer stupidity:


Batten down the hatches, have you heard? There's a weather situation a'brewing, one with the best of all possible weather situation names. (Disclaimer: Should Snor'eastercane Sandy actually hurt people, which we really hope she doesn't, we will disavow any and everything in this post. Her name is Sandy! She's a snor'eastercane. What could she have to hate about?) But what's a snor'eastercane, you ask? Allow us to tell you everything we know about Snor'eastercane Sandy, including how you should feel about her possible presence in the East Coast just in time for Halloween. Remember how much fun Snowtober Saul was? (I'm still holding a grudge that we didn't go with Snoctober.)

Snor'eastercane Sandy, so dubbed by the Wall Street Journal ("Sandy," of course, comes from those folks who name storms) is an "unlikely meteorological scenario: a hurricane blending with an inland snowstorm just in time for Halloween." Hurricane Sandy, a hurricane not yet a snor'easter, is currently approaching the Bahamas. Don't worry, weather in New York City and the East Coast will be pretty great for the rest of the week. "For next week, however, it’s starting to seem like not a question of if but where this giant 'snor’eastercane' might strike," writes Eric Holthaus. "Regardless of the exact landfall location on the East Coast, impacts will be felt from Florida to Maine." He gives "two-out-of-three odds that Greater New York experiences significant impacts from this storm"—by that he means primarily "storm surge, wind and heavy rains" (and maybe snow). She could cost billions. Keep a watch on her here; via the AP's Seth Borenstein, scientists predict a 70 percent chance she'll hit the Northeast and Mid-Atlantic (otherwise, she might just snor'eastercane herself out at sea). There will also be a full moon, meaning TIDES and WEREWOLVES. Keep an eye out.

There are as many feelings about Sandy and her snor'easterncane status as one might have about various types of pie, mincemeat (gross) to pumpkin (yes, please) to pecan (good, but so bad for you) to meat (terrifying, maybe delicious?). In hopes of heightening your sense of preparedness for his weather situation, we have analyzed the various types of ways in which you may prepare, mentally, physically, emotionally, and otherwise for this upcoming gambit with Ole Man/Lady Weather.

And I'm sorry, but her lame disclaimer doesn't get her off the hook. And what's up with using the first person plural "we" to describer herself, anyway? Doesn't she know that Any Rand wrote an entire novel (Anthem) in which the characters all referred to themselves in the plural in order to mock collectivism?

There's a longstanding cliche in this country that people hate the so-called "New York Media" because it's so liberal. Personally, I think it is more because a lot of people who work in the media capital of the world are fucking blithering idiots.