So Paul Ryan is a Hunter? Who Gives a Shit? 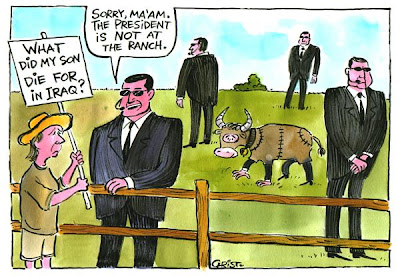 I’ve said before that it isn’t often that a contributor for any mainstream website writes anything that perfectly captures my own viewpoint, but last Friday Hamilton Nolan of Gawker did a pretty good job of summarizing the sheer idiocy of identity politics:


The Romney-Ryan ticket, which will lose the US presidential election this November, is still giving it their all. The campaign is trailing in key states like Wisconsin, Iowa and Ohio. But they have a secret weapon: VP nominee Paul Ryan is an avid hunter.

Who gives a shit?

Hunting is one of the top activities that politicians always do while looking painfully ridiculous, right up there with "dancing awkwardly at black churches." Paul Ryan, though, has an advantage: he actually is a hunter—a bowhunter, no less—who's been hunting since childhood, and who has all the expertise in and enthusiasm for hunting that come with a lifetime's experience.

Who gives a shit?

"[Wisconsin, Iowa and Ohio] are rich in hunters and crucial swing-state Electoral College votes, and Mr. Ryan's deer-hunting credential is a resonant cultural symbol," declares the WSJ, noting that Ryan will be speaking to the U.S. Sportsmen's Alliance meeting in Ohio tomorrow. Congratulations, Midwestern hunters: you are being treated like a bunch of simplistic children. The whole business of politicians posing in hunting gear, whether they really like it or not, is the height of bullshit, empty identity politics.

Hamilton then goes on to sum up what is wrong with voters who fall for such lame appeals:


"Take just one look at Paul Ryan holding a bow at full draw, and you know he's the real deal," one archery buff tells the WSJ. This is a man who is allegedly running on his economic platform. WHO GIVES A FUCK IF HE CAN SHOOT A BOW AND ARROW? He is supposed to be tasked with fixing Medicare, for fuck's sake. "Can operate a calculator correctly," would be a more relevant credential. Smell the sweet aroma of patronization, hunters. If you cast your presidential ballot based on which ticket likes bowhunting more, you are dumb; that is exactly what the campaigns think you are, and that is why Paul Ryan is speaking to a hunting group on the day that deer season opens.

Of course, this kind of crap has been going on throughout American history. Back in the early 19th century, for example, candidates who grew up in a log cabin would play up the fact even though it had nothing whatsoever to do with how they might handle a war with a Britain or France or how they might deal with the thorny and divisive issue of slavery. It is in the modern television age, however, that identity politics has reached a point where it now largely drowns out issues of real substance.

Back in the 1970s, candidates would be sure to be photographed standing outside construction sites wearing hard hats to emphasize their supposed empathy with the working man. Ronald Reagan mastered the art of always appearing in front of a whole row of American flags to visually reinforce the idea of his supposedly superior level of patriotism. A big moment in Bill Clinton’s 1992 presidential bid was when he played the saxophone on the Arsenio Hall Show. His wife then elevated such pandering to an even higher level during her first New York Senate campaign when, despite having grown up a few miles from Wrigley Field, she doffed a Yankees cap and claimed to have always been a fan even though any true Chicagoan would be horrified at the very idea of ever pledging allegiance to any Big Apple sports team.

President George Bush the Lesser really upped the ante on this stuff when he purchased his ranch down in Texas specifically so he could be constantly photographed clearing brush, which somehow reinforced the idea in the minds of millions of idiot voters that he was just a regular guy whom they could sip a Lone Star beer with afterward. Ever noticed how much time Chimpy has apparently spent on that stupid ranch in the years since leaving office? Uh, that would be about NONE near as I can tell.

I’ve stated repeatedly on this blog that anyone who enters the voting booth this November thinking that there is any difference between President Hopey-Changey and Governor 47%-er on issues of real substance is delusional. But those who are going to go vote based on the fact that Ryan is a hunter, or Willard’s wife is an equestrian or Obama has a superior jump shot, or Biden…well, I’m not really sure what it is that Biden does exactly…is the absolute worst of the worst, even lower on the food chain that Bill Maher’s “dipshit” low information voters (although, in fairness, many of them probably ARE low information voters, which is why such appeals work so well).

Probably the most amusing aspect of this issue is that Ryan’s running mate is actually the worst candidate at making these kinds of appeals that we have seen on the national stage in a very long time. No matter how hard he tries, Willard always comes off as an arrogant rich prick who was born with a silver spoon shoved up his ass. To what will likely be their ultimate chagrin, the Republicans managed to nominate as their standard bearer a candidate who is a little TOO true to himself. The irony of this happening to the party of charlatans like Ronald Reagan and George W. Bush is quite delicious indeed.