Does Obama Really Want Out? 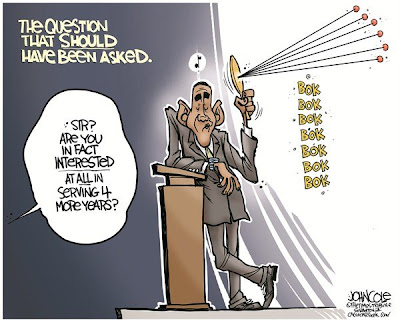 Over the past few weeks, I have written several times that I anticipated that short of a major stock mark crash or widespread unrest in the Middle East causing a rapid oil price spike that Obama was a shoo-in for reelection. There was, however, one factor that I'll admit I failed to consider: that maybe President Hopey-Changey does not WANT to be the puppet-in-chief for four more years. The very idea, unthinkable before Obama's disastrous debate performance last week, was put forth yesterday by blogger Kevin Baker of Harper's Magazine:


The whole rationale for the continuing existence of the conservative, Democratic Party leadership to which Mr. Obama belongs is that they, and only they, can save us—save our Social Security and Medicare, prevent us from invading Iran, and keep the Supreme Court at least where it is now.

We were so scared and bewildered we continued buying into this rationale even as President Obama betrayed pretty much everything he ran on, hired back all the old Clinton hands who did so much to help cause the world financial panic in the first place, and turned over all of our names and addresses to the desiccated mummies still running the Democratic Party.

We put up with it all, thanks to the growing conviction that he really would win again and save us all from the lunatic, nihilist Republicans.

We put up with it even though he solemnly promised absolutely nothing for his second term, save that he would once again try to make us work more years for less money and fewer benefits, in exchange for a budget deal.

Then Barack Obama came apart before a national television audience and, in an hour and a half, changed the entire public image of both men. Overnight, Romney went from national punch line to Pew-poll front-runner.

The diehards who posit that Obama is just setting Romney up for the next debate are fooling themselves. The idol really is smashed, and I suspect for good. Far from playing three-dimensional chess, the most logical explanation for the president’s Denver daze, as I wrote after the debate, is that he simply wants out.

If Baker is right, and I suspect that he is, it may be the most ominous signal yet for those of us in the "reality based community" that our fear that an economic collapse of the U.S. is going to come sooner rather than later might be justified. Sure, being the oligarch's hand picked "good cop," placed in office to prevent populist retribution against the big banks and Wall Street for crashing the economy, to say nothing of preventing Bush administration officials from being prosecuted for starting two disastrous but highly profitable wars, while betraying the hopes and dreams of the millions of voters who put you in office has to be highly stressful. But Obama didn't rise to the top of the political heap, stepping over two of the biggest names in U.S. politics along the way, by being a shrinking violet. If he wants out, it is likely because he KNOWS some bad shit is going to be coming down sometime in the next four years and he doesn't want to be the fall guy when it happens.

Way back on May 20, 2011, I wrote a post called "Why the Hell Does ANYONE Want to be President in 2012?" in which I wondered about the sanity of those who were then scrambling to win the highest figurehead office in the land at such a perilous moment in our history. Well, now we have an indicator that maybe, just maybe, Obama is not quite as obtuse to what is really going on as he has always appeared to be.

Sadly, even though there is a good chance that Baker may be right, he himself still has no clue regarding the real implications:

If we can do this, then we will have demonstrated to ourselves and to the nation that we no longer need our keepers, all these very practical, very moderate individuals who keep insisting that they alone can save us, even as they once again betray us.

If only we can save ourselves, there’s no telling what we can do next.

Sorry, Kevin, but if the oligarchs who really run this country want those things, they are going to get them sooner or later whether Obama wins reelection or not. Obama was placed in office by the Democratic Party's "keepers" to put a smiley face on the very policies you so dread, and to keep the liberals and progressives in line and not storming out on to the street. In that, other than the brief blip that was Occupy Wall Street, Obama was a total success. I originally thought that the ratfuckers would want to keep him around for another four years to try and keep the lid on popular anger, but maybe they are also thinking that if the shit goes sideways in the next four years they'll need a hatchet man to handle things rather than a snake oil salesman. It certainly is the way the infamous Vampire Squid seems to be betting. And whenever Goldman Sachs puts its own money on the line, it behooves all of us to pay close attention to how they are betting.

So does changing my outlook on the election mean that I am also going to reassess my stated determination not to participate? Not at all. Fact is, I am actually rooting for a Romney victory. I've had it with all the hypocritical bullshit from the past four years. In particular I'm sick of liberals and progressives who dropped their support for the antiwar movement because all of the sudden it was their own guy ordering the slaughter of innocent civilians in the Middle East and South Asia. I'm also sick and tired of upper middle class twits, the same ones whose tastes the "liberal" side of the "liberal" media slavishly cater to, pretending but not really giving a fuck about the millions on the lower rungs of the ladder who have lost their jobs since the beginning of the the Great Recession. As long as their 401(k) balances have fully recovered, they really wouldn't care if Ben Bernanke were caught pulling a Jerry Sandusky in his office at the Federal Reserve.

On the flip side, I'm also sick to fucking death of idiots who keep voting for charlatans like Romney because he panders to their dumbass cultural values. I know most people don't pay a lot of attention to politics, but two basic facts about Governor 47%-er ought to have worked their way through the haze into the lizard brains of even the most dimwitted voters: the man got rich(er) by offshoring American jobs and pays half the fucking tax rate on his ill gotten gains as people who have to actually work for a living. If you are not a millionaire of a billionaire and, knowing that, you vote for him anyway, well, fuck you, you are soon to get what you (ahem) so richly deserve.

Willard Mitt Romney is the perfect candidate for Spoiled Rotten Nation, and for him to be elected prez-nit at this moment in time would be the culmination of more than 30 years of the denizens of this decadent and depraved society abandoning even their basic responsibilities as citizens living in a supposed representative democracy by turning their brains off and allowing the sociopaths who desire nothing more than to utterly destroy their livelihoods, security and futures to do their thinking for them. I, for one, welcome our new Wall Street overlord, if only so this stupid fucking country can stop pretending and finally get to where we are so damn determined to go.