Friday Rant: Why the Hell Does ANYONE Want to be President in 2012? 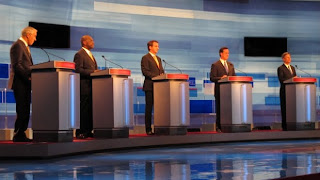 For political junkies, the past week or so of the presidential campaign has been quite entertaining. First up was the good ol’ boy American Taliban, the Hillbilly Husckster from Ar-Kan-Saw, who decided that playing bass guitar on teevee behind washed up old pop musicians for an audience only half paying attention because their other hearing aid-plugged ear is listening out for Jesus beckoning them home is a LOT more fun than spending a year-and-a-half eating shitty road food and pressing the flesh with the sweaty, pale faced, blimp-sized plebes who form the base of the Republican party. Can’t say I blame him for that, actually.

Next up there was the implosion of the epic hair piece of reality teevee, who had actually been leading in the preference polls and whose withdrawal from the race caused considerable chagrin among stand up comedians all across the land. Trump spent weeks making a spectacle of himself by hammering Obama on the birther issue only to have the latter kick him in the gonads by releasing his long form birth certificate. After Obama’s announcement we were treated to the awe-inspiring sight of The (whiny-bitch) Donald complaining about the way he had been treated by the press as if he had no idea that a Presidential campaign can turn nasty, especially when you start throwing the darts first. Personally, I was sorry to see him go since I was looking forward to the first “reality Presidency” in which the White House gets wired up with cameras everywhere and we get to watch as an impatient Trump berates hapless senior officials during cabinet meetings. Now THAT would be reality television worth watching.

Completing the self-immolation trifecta was reptilian cracker and supposed political hatchet man Newt Gingrich getting his lunch money stolen from him on Meet the Press by that utterly insipid milquetoast masquerading as a reporter, David Gregory. No other single politician alive today has said more stupid, banal and contradictory things in his career than Newt Gingrich. This guy makes Charlie Sheen look like a model of emotional stability. Within a couple of days after the broadcast, the Newtster was apologizing to fellow Republicans and taking a page out of the Sarah Palin playbook by crying that he had been unfairly treated by Gregory, who had merely insisted upon asking him questions based upon, you know, his actual record.

Speaking of Sarah Barracuda, there is no unindicted politician in America whose star has fallen faster than the Fraud of Wasilla. A year ago she was riding high, promoting her book, bashing Obamacare and basking in the applause of emotionally stunted and empathy-challenged old white people everywhere. Then she, like the Huckster and the Trumpster, decided that being a teevee star was a lot more fun and personally enriching than that boring old politics stuff. She even brought the family along for the ride, securing a slot for her celebritard wannabee daughter on the Dancing With the Stars. And now that everybody’s favorite teenage mom turned abstinence scold has had plastic surgery, I figure it’s just a matter of time before she and LiLo find themselves hanging out together in L.A., doing tequila shots, snorting lines and humping any dangerous looking Eurotrash dude who can hook them up for more.

Beyond your front runners, the Republican side is a collection of political has-beens and never-will-bes, most of whom wouldn’t be recognized by the public if they happened to rob a bank without wearing a ski mask. Of this group I want to give a special shout out to homophobic freak Rick Santorum who, by being such an obnoxious flaming asshole, has perversely probably done more to advance the cause of gay rights than any other single politician in America. People who aren’t completely deranged in their attitude towards gays hear the shit that comes out of his mouth and think to themselves, “I don’t know if I’m on the side of the gays, but I sure as hell don’t want to be on the side of THAT guy.” The most amusing aspect of little Ricky’s candidacy is that if you Google his last name the first thing that pops up is the definition given to it by gay sex advice columnist Dan Savage in retaliation for all of his gay-bashing: “Santorum - The frothy mix of lube and fecal matter that is sometimes the byproduct of anal sex.” And no, I’m not making that up. In fact, I just copied and pasted it from Google.

All of this buffoonery really leaves one man standing for the Republicans, a man who the sound of his very name is like fingernails on a blackboard to conservatives despite the fact that he has spent the past four years running like an African tribesman being chased by an enraged rhino away from every political position he ever claimed to hold. Mitt Romney’s two big problems are that he is Mormon--and thus cannot pass for a righteous born again no matter how much he panders--and that Obamacare, which the Republicans claim to hate more Al Queda itself, is really just Romneycare without the perfectly coiffed, silver tinged hairdo. The implosion of the other frontrunners leaves the Republicans with the troubling prospect of having to turn to a guy who much of the party wouldn’t mind seeing get run over by bus.

On the other side, of course, is the incumbent, whom the Democrats are stuck with no matter how often he ties up their liberal base, sticks a rubber ball in their mouths and bones them like Marcellius Wallace in the basement scene from Pulp Fiction. The Mighty O is going to raise a billion dollars in campaign cash from his Wall Street benefactors, a little tidbit I’m adding just in case any of you have any remaining doubt as to whom he really represents. Mr. Hopey-Changey is betting that rising food and gas prices won’t pull a Tonya Harding on the economy before election day so he can skate past whichever of the moral and political pygmies the Republicans finally choose to oppose him.

Obama has been lucky to date that the shenanigans of his toady Treasury Secretary and his utterly colorless Federal Reserve Chairman have for the moment pulled the economy out of the free fall it was experiencing early in his term. The price of stability was trillions in additional unsustainable deficit spending added on to the backs of future generations, of course, but that matters little if your primary goal is to get reelected at all costs.

It’s becoming pretty obvious, however, that America’s day of financial reckoning will likely arrive during the next Presidential term. Knowledgeable peak oil writers such as retired government analyst Tom Whipple have tentatively placed the date that worldwide oil production begins to decline at 2014. Whoever is in office at that time is going to get politically tarred and feathered as gasoline prices shoot up well beyond the heights attained to date and our cheap-oil based economy begins to fly apart for keepsies. The unlucky soul sitting in the Oval Office chair is going to be the object of public ire such as not been seen since Marie Antoinette allegedly advised the starving workers of France that they could substitute a good gateau for their absent daily croissant.

Obama is already running hard and apparently really wants to be the epic fall guy. If he wasn’t one of the most arrogant human beings who has ever graced the planet he would consider himself lucky if he gets through his current term without everything falling apart. A timely, “I need to spend more time with my family” announcement would be the right move, but he’s too blinded by hubris to see that. I’m really hoping that he gets his wish, actually. Bush stuck around long enough to finally have his own political failures hung squarely around his neck, so it’s only fitting that the man who followed him and who raised false hopes in tens of millions should get a similar comeuppance. As for me, I’ll be sitting this election out--the first Presidential election of my adult lifetime in which I have not voted. For no matter who wins in November 2012, the one thing I can guarantee you is that the country will lose.

But wait, I hear you pleading. What about Ron Paul? Hey, don’t get me wrong—I like Ron Paul even if I disagree with about half of what he says. He is the only candidate running who opposes America’s war and empire foreign policy. But just the fact that he actually WANTS the job at this time and place ought to be proof enough that he is either mentally unstable or taking some really good mind-altering medications, and that alone should disqualify him from consideration.
Posted by Bill Hicks at 6:35 AM