Cisco to Lay Off Up to 5,000 More Employees While Mainstream Media Yawns 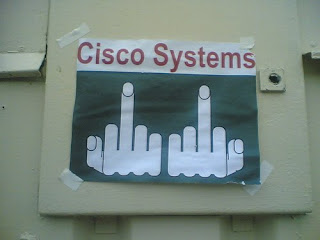 
A month after shedding 550 employees due to the shutdown of its Flip video camera line, Cisco Systems has announced more job cuts by the end of this summer to save $1 billion in annual expenses.

Layoffs at the troubled networking giant will begin with a recently announced early retirement program, said Gary Moore, Cisco's chief operating officer, in a third-quarter earnings call late Wednesday. The program itself will cost Cisco a one-time expense of up to $1.1 billion, he added.

"To be clear, we do anticipate a workforce reduction. On a global basis, affecting both our full-time and contractor workforce, we are taking the time needed to do what's right for our business and for our people," Moore said.

Although Moore did not specify how many jobs would be cut, AP estimates that 4,000-5,000 of the company's 73,400 employees, or 6 percent of the workforce, will get cut. The figure is based on the same percentage the $1 billion savings translates to against its annual expenses.

Another day, another major layoff announcement. Yawn. (Scratches self) So who got eliminated from Dancing with the Stars last night?

That seems to be the attitude of the general public and of our opinion “leaders” in the mainstream media. Unfortunately, it isn’t so boring for the thousands of families about to be cast into the grim uncertainty of unemployment. For them, a real nightmare is about to begin.

According to economists (a profession that by now really ought to be held in even lower esteem than lawyers), the economy is “recovering” and has been for almost two years now. Virtually none who practice that alchemic art masquerading as an actual scientific discipline acknowledge that America’s renewed economic “growth” was purchased with insane and unsustainable levels of federal deficit spending. Subtract the federal largess and we would still be in the middle of the worst economic depression since the 1930s.

But don’t worry, say the economists. The massive job losses of late 2008 and early 2009 have been halted and the economy is again creating jobs. And while technically true, there are all sorts of problems with that assertion, namely:

1). America needs to add approximately 150,000 jobs every month just to keep pace with population growth. The Bureau of Labor’s Statistics’ (BLS) monthly job report has only seen seven (7) positive figures out of the past 40 months, and the numbers for three of those months back in 2010 were goosed upward by the U.S. Census Bureau hiring enumerators for the decennial count, all of whom have subsequently been laid off again.

2). The BLS monthly jobs report is highly flawed in that it uses the so-called Birth-Death Model that adds jobs supposedly being created by small businesses that do not get picked up in the official statistics. Even the BLS admits that the Birth-Death Model does not accurately reflect major turning points in the economy. During most months since last recession began in January 2008, the Birth-Death Model has added unverifiable jobs, but because of the way the statistics are assembled there is no way to adjust the numbers with any accuracy.

3). The total number of U.S. jobs is approximately seven million lower than it was in December 2007, and in fact is at approximately the same level it was in January 2000. This means America has essentially experienced ZERO job growth for going on 12 years, despite the total population expanding by approximately 30 million since then.

4). Even if you buy the BLS’s official job statistics showing that jobs are again being created in substantial numbers, most of the employment improvement has been in the area of temporary workers and low wage service industry jobs. The higher paying middle class jobs are largely not coming back.

5). The number of people working part time would who like a full time job is at an all time record high. The April 2011 BLS report showed that 8.6 million people were working part-time “for economic reasons.” In other words they could not find a full time job.

6). Governments, especially at the state and local level, have begun furloughing and riffing employees in large numbers due to budget deficits. As tax revenue remains stagnant or even continues to decline, expect this trend to accelerate. Traditionally, government jobs have been a source of very stable and secure employment.

Add this all up and the picture is of a slow motion train wreck for middle and working class people. Every time an unlucky employee of a company like Cisco or a junior public school teacher in a bankrupt school district gets their pink slip, they are being cast out from stable, middle class employment into a job market in which the best work they are likely going to find is either a temp position or in retail sales. They can also say goodbye to their health and retirement benefits as well as any financial security whatsoever. And those are the lucky ones. The unlucky ones become “99ers”; people who fruitlessly search for work for nearly two years only to have their unemployment benefits run out.

Every day, every week and every month that passes more and more middle and working class Americans join the ranks of those who have begun the downward spiral towards destitution and poverty. So far, most have been content to quietly accept their fate even as the media treats them like they do not exist. How much longer will they remain docile?

That, my friends, is another key question, for the potential exists for a massive outbreak of domestic civil disturbances the likes of which we haven’t seen in America since the late 1960s. Trends forecaster Gerald Celente is fond of saying that “when people lose everything they lose it.” So far, they don’t seem to have yet lost enough to lose it, but that day is no doubt coming.
Posted by Bill Hicks at 10:33 AM