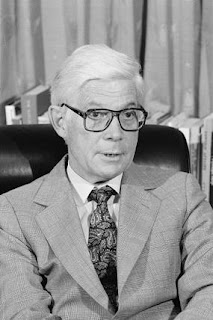 Yesterday’s post about the unsavory collection of clowns, hucksters, frauds and charlatans currently running for president made me long for a time when serious-minded people who care about the long-term stability and sustainability of their country actually had a viable candidate to support. The fact that it has been over three decades since there has been such a candidate speaks volumes for how low we have sunk as a nation in terms of the sheer volume of feel-good lies that we tell ourselves.

The story of the presidential campaign of former U.S. Representative John B. Anderson is so at odds with anything we see going on in politics today that it almost seems like it happened in a whole other country if not to say on a completely different planet. The Republican Anderson was serving his tenth term in the House when he decided in 1980 to challenge incumbent President Jimmy Carter. Carter himself was the last U.S. president to at least take tentative steps to treat Peak Oil as a serious political issue, but that didn’t stop him from putting forth the Carter Doctrine, the unfortunate mandate guaranteeing access to Middle East oil that serves as the foundation for our grotesque foreign and military policies in that region to this day. In any event, Carter was such an ineffectual leader that despite his best intentions he likely did more damage than good to the cause of getting Americans to understand the threat posed by finite world oil supplies.

Anderson, on the other hand, was an extremely unlikely messenger to preach the gospel that the country was endangering itself by becoming ever more reliant upon oil imports. Hailing from a very conservative safe Republican district in a largely rural part of Illinois, during his second Congressional term in the early sixties he actually introduced a Constitutional Amendment to "recognize the law and authority of Jesus Christ" over the United States. Even evolution-doubting, preacher-politician Mike Huckabee might today blush at that one.

As time went on, however, Anderson moderated his social views even as he remained fiscally conservative. Back then, believe it or not, Republican office holders could actually thrive without getting on their knees and performing felatio on the leadership of Christian right seven days a week. By the time he decided to run for president, the Ronald Reagan juggernaut was gearing up to seize control of the Republican party, but there were still enough Rockefeller-moderates around that it appeared they could conceivably deny the nomination to the man they derisively nicknamed Bonzo if they all unified behind the same candidate.

Early on, the moderates’ hopes were pinned on former Ambassador to China and CIA Director George H.W. Bush, who during the campaign derided Reagan's supply side mantra as "voodoo economics." But once the primaries started a funny thing happened. Anderson took second place in a couple of early Republican contests and was suddenly thrust over Bush into the national political spotlight. It’s difficult today to imagine a guy who was running the farthest to the left in either political party actually being treated like a serious candidate by the mainstream media (paging, Dennis Kucinich), but that is exactly what happened. It was a different and far better time in America in those days.

What really set Anderson apart from the other Republican candidates was his willingness to offer up concrete if unpopular solutions to America’s problems. As the election year began, the country was mired in a deep recession brought on by the second of the major 1970’s oil shocks. The two disruptions to Middle East oil supplies that occurred in 1973 and again in 1979 should have served as a clear warning that we were collectively heading down an unsustainable path. Being a sensible politician of the type who could never hold high public office today, Anderson as one of his central campaign positions advocated for a 50-cent-a-gallon gasoline tax (equivalent to about $1.50 today) to curb oil consumption and encourage the production of higher mileage vehicles. The idea was to take actual action to begin to wean America off of its oil addiction rather than just mouthing platitudes. Despite the ire this proposal raised, Anderson received support from a wide variety of prominent Americans, from former first lady Jacqueline Kennedy-Onasis to Doonesbury cartoonist Gary Trudeau, who featured Anderson’s quest prominently in his comic strip.

What happened next, unfortunately, was entirely predictable in hindsight. The Republicans rejected Anderson in favor of the slightly crazy, B-movie actor Reagan despite the latter’s penchant for saying dumb things like proclaiming that trees cause air pollution. Anderson refused to be deterred and launched an independent candidacy—and at one point during the late summer was amazingly polling at over 25% of the electorate. It appeared for a brief moment that America might actually elect a man who was serious about our oil-related predicament. Sadly, as the campaign wore on Anderson slipped in the polls as voters decided they preferred the sunny, feel good blather of the utterly vapid Reagan, and by election day the third party candidate’s support dropped to a mere 7% of the vote.

The election of Ronald Reagan was the key moment in recent American history when we first chose as a nation to pretend that everything would be hunky-dory if we just crossed our fingers and wished hard enough for it to be so. By the time of the Gipper’s 1984 re-election campaign, the economy was “recovering” thanks to a big drop in oil prices resulting from the coming online of the world’s last great supergiant oil fields in the North Sea, Alaska and Mexico. Reagan consolidated his hold on the presidency against Carter’s inept Vice President, Walter Mondale, by proclaiming that it was “Morning in America,” when in fact it was merely the start of a couple of decades of an economic Indian Summer that would precede the eventual onset of a long, cold Peak Oil-induced winter.

Being a lifelong politics junkie (an addiction I am trying desperately to overcome) I often think back wistfully to the John Anderson campaign, which happened when I was still an idealistic young high school student. That he was the Congressman from my home district and hence something of a local celebrity made it all the more painful when he finally got boot stomped by the national political establishment. When we look back over recent history and lament what has become of our country, Anderson’s quixotic quest for the highest office in the land stands as an unfortunate gravestone marking the demise of a potentially better future for us all.
Posted by Bill Hicks at 8:25 AM