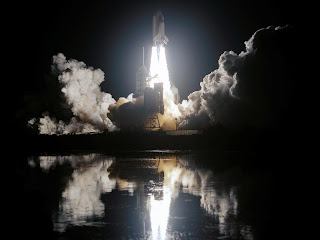 
Friday the 13th hit hard for 1,942 workers in the Titusville area.

That's how many employees were affected by the latest round of layoffs announced by United Space Alliance LLC, an organization that partners with NASA to run the space shuttle operation.
---
The cuts weren't a surprise — the alliance has been cutting hundreds of jobs as the space shuttle program winds down. In fact, United Space Alliance has accounted for some of the biggest mass layoffs over the past year. It gave 549 workers a pink slip in February on top of 53 layoffs announced in November.

Eventually, most of the 9,000 workers connected to the Space Coast will need to find new jobs.

Fitting that this story would appear in the press a mere one week after my blog post about the Apollo Program and how its demise signaled the end of the Age of Exploration. The Space Shuttle program lasted for three decades after the initial flight of Columbia in 1981, but for all of the hoopla that surrounded the first few launches the program represented a space agency merely running in place as America lost interest in properly financing it.

NASA had wanted to move on to a manned Mars mission after Apollo, but President Nixon and a stingy Democratic Congress put the kibosh on the idea for budget reasons. So the Shuttle program was green-lighted as a way for NASA to continue putting people into space at a much lower cost. The idea was that a reusable space ship would be more economical. Well, it certainly was that, even despite the fact that 40% of the shuttle fleet eventually exploded. What it was not was a forward step in space exploration. Earth orbit-bound shuttle flights became routine in the minds of the public, who stopped paying attention except in those instances when disaster occurred.

Soon we will see the last shuttle launch, and the era of American manned spaceflight will have effectively ended. NASA has plans build a new space vehicle named Orion and in 2006 announced plans to build a permanent moon base by the 2020s. But with this coming era of federal budget austerity, which will only be made worse by increasing effects of Peak Oil and resource depletion, it is pretty safe to say that these are nothing more than pipe dreams.

For ask yourself this, if the space program was still moving forward instead of DE-evolving like so many other areas of our society, why are 9,000 Floridians who work in the industry slated to lose their jobs? Presumably, these are people who know a thing or two about building and maintaining a space vehicle. For the workers themselves this is truly the worst of times as they are being cast out into a slowly collapsing economy in which good-paying jobs are few and far between.

The ultimate success of the Apollo Program, coming as it did one year before America’s domestic oil production hit its all time peak, represented the high water mark in our nation’s technological achievements. For all of his faults, John Kennedy committed this nation to a triumph for the ages. Forty years later, by contrast, the ending of the Space Shuttle program provides us with the clearest evidence to date of a people and an empire who are well on their way to being consigned to the dustbin of history.
Posted by Bill Hicks at 6:10 AM