Book Review: Zone One by Colson Whitehead (and a Site Announcement) 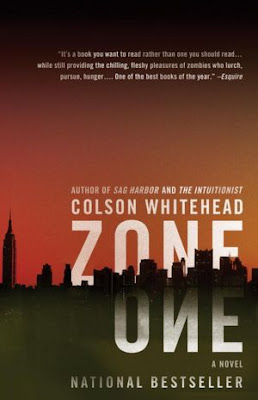 "To Kaitlyn, the scourge came from a different population. She aimed at the rabble who nibbled at the edge of her dream: the weak-willed smokers, dead beat dads and welfare cheats, single moms incessantly breeding, the flouters of speed laws and those who had only themselves to blame for their ridiculous credit card debt."

There is just something primal about a great zombie story. Maybe it's because zombies touch the deep fear many of us have of ever being singled out for destruction by a crowd of our fellow citizens, or maybe it's because zombies make the perfect metaphor for our brain dead, out-of-control consumer culture, but it is probably no accident in these paranoid times that the zombie has risen (so to speak) from B-movie status to become a very prominent icon in our popular culture.

That said, and take this as coming from someone who considers himself a bit of a zombie aficionado, most zombie novels (ahem) stink. They are often either self-published and atrociously edited and/or, the hero/protagonist is portrayed as some cartoonish action figure mowing down legions of the undead and ushering his little band of survivors to safety. Left unexplored in such books is a thoughtful examination of what it would be like to actually live in a world overrun with the undead. The one previous novel that explored such territory was Max Brooks's sublime World War Z, which stands as a towering monument among the vast wasteland that is zombie literature.

Well, now we can add a second entry to the list of great zombie novels. Colson Whitehead is probably the most talented writer to ever tackle the genre, and his writing style more resembles someone who produces short fiction for the New Yorker than someone who writes with too much testosterone and not enough (double ahem) brains. Zone One starts off kind of slowly, and much of the action takes place in a series of flashbacks, but it picks up steam and towards the end begins to deliver a series of strong stomach punches to the reader.

The story's protagonist, whose true name is never revealed but who goes by the ironic nickname of Mark Spitz, has been assigned as a sweeper, disposing of straggling numbers of the walking dead from lower Manhattan as part of a project by the newly reborn U.S. government to retake the island and once again make it suitable for habitation by the living. Mark Spitz and his fellow sweepers move methodically from building to building, ousting and dispatching the occasional animated corpse while dealing with their own tormented memories of the Last Night and everything they have lost and have witnessed since then. A constant theme of the novel is whether the survivors should let themselves hope that civilization can really be reborn, or whether they should remain within their hardened psychic shells (suffering from variations of a malady wryly named Post Apocalyptic Stress Disorder, or PASD) until the war against the undead has truly been won.

As all good zombie stories should, Zone One contains plenty of wry social commentary on the times in which we live, satirizing everything from the militarization of our society to the banality of reality television. The plot, despite the many detours through each main character's personal history, builds to a appropriate and logical climax. My one forewarning is that this is a literary zombie novel, and the style of writing may be a bit off-putting at first (this could also be why it has such a low average customer review rating on Amazon). Overall, Zone One is a very appropriate story that seems distinctively tailored to times in which we live.


Site announcement: I will be out of town starting tomorrow until after Labor Day (September 3rd). There will no posting and there may be long delays in moderating comments (depending on my Internet connectivity) during this time.

Bonus: "All we want to do is eat your brains"