Romney Throws in the Towel 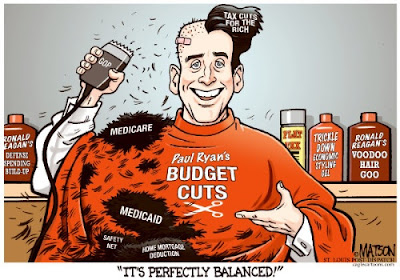 Well, not really. But the selection by Willard of the detestable and hated Paul Ryan to be his running mate certainly isn't going to help him at all. This pick was solely about trying to shore up his conservative base so that they don't stay home on election day. It does nothing to help "broaden the tent" and bring in more minority voters, especially Hispanics, that the Republican party is always giving lip service to saying it wants to do. It also indicates that despite all of the social issues nonsense spewed out of the mouths of the likes of Sarah Palin, when the rubber meets the road the Republican Party leadership is all about ensuring that the federal government should first and foremost exist to serve big business. Ryan, the perfect ideological Randian stooge, meshes perfectly with Romney's vulture capitalist to form a billionaire mogul's wet dream of a perfect presidential ticket.

All of which serves to make President Hopey-Changey the prohibitive favorite to win reelection this November. I've said all along that Obama's chances to win a second term were largely dependent on whether Ben Bernanke and Obama's economic team could manage to stave off the next major market crash until after this election, and every day the chances of that happening are increasing. The market could still deliver an "October surprise" like it gave to Bush and McCain back in 2008, but the difference this time is the "stewards" of the economy are on guard for another Lehman Brothers-type meltdown and not asleep at the switch.

I don't really believe that Romney and the Republicans are consciously trying to throw this election so that the next big phase of the economic meltdown that started in 2008 will happen while a Democrat is sitting in the White House, but even if that is not their deliberate intent the result is likely going to be the same. I now expect the status quo of stock market-levitated economic unreality to continue at least through the end of this year. After that, all bets are off, and Obama will likely be the fall guy to get the blame when it does all finally come crashing down.


Bonus: Steve Miller was also born in Wisconsin, so this song is dedicated to Paul Ryan