Guardian Article About Romney's "Sensata Problem" Tells Only Half the Story 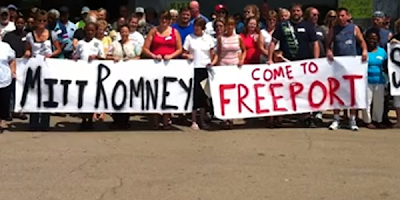 I've covered this story a couple of times before, but it's in the news again and because it involves my hometown of Freeport, Illinois, my interest is obviously personal. This is the first time that Freeport has had any kind of impact on the fortunes of a presidential campaign since one of the famous Lincoln-Douglas debates was held there back in 1858 during the Senate race that served as a warmup for the national election two years later.

Anyway, Paul Harris of The Guardian newspaper wrote the latest article about the role of Bain Capital in closing the Sensata plant in Freeport and moving it to China. The details, while quite gruesome, are sadly pretty typical in modern day America:


The shock of losing a precious job in a town afflicted by high unemployment is always hard. A foundation for a stable family life and secure home instantly disappears, replaced with a future filled with fears over health insurance, missed mortgage payments and the potential for a slip below the breadline.

But for Bonnie Borman – and 170 other men and women in Freeport,Illinois – there is a brutal twist to the torture. Borman, 52, and the other workers of a soon-to-be-shuttered car parts plant are personally training the Chinese workers who will replace them.

It’s a surreal experience, they say. For months they have watched their plant being dismantled and shipped to China, piece by piece, as they show teams of Chinese workers how to do the jobs they have dedicated their lives to.

“It’s not easy to get up in the morning, training them to do your job so that you can be made unemployed,” said Borman, pictured, a mother of three who has worked for 23 years at the Sensata auto sensors plant.

Borman knows her eventual fate in the stricken economy that surrounds Freeport. “I am going to be competing for minimum wage jobs with my own daughter,” she said.

Such scenes have been common in America as manufacturing has fled abroad in search of cheaper wages.

But, in the midst of the 2012 presidential election, Freeport is different. For Sensata is majority-owned by Bain Capital, the private equity firm once led by Mitt Romney, that has become a hugely controversial symbol of how the modern globalised American economy works. Indeed, Romney still owns millions of dollars of shares in the Bain funds that own Sensata.

So as Sensata strips out costs by sacking American workers in favour of Chinese ones, the value of Romney’s own investments could rise, putting money into the pockets of a Republican challenger who has placed job creation in America at the heart of his bid for the White House.

The story of how Bain became involved in a car factory in a small town amid the rolling farmland of northern Illinois is emblematic of modern financial wheeling and dealing.

Bain bought the firm that was to become Sensata in 2006, when it was the Texan arm of a Dutch company. It then floated it on the stock exchange in 2010, but kept a majority stake. Sensata came to own the Freeport plant at the beginning of 2011 as part of a wider purchase of a car parts business from Honeywell.

Sensata spokesman Jacob Sayer said closing the Freeport plant to cut costs was a key element of the Honeywell deal. “If that had not been part of the strategy, then the deal would not have been so attractive,” he said.

Bain has declined to comment. But it has made a lot of money from owning Sensata, quadrupling its initial 2006 investment. In business circles that focus on the bottom line is all that matters. But, not surprisingly, it cuts less ice in Illinois.

“I understand business needs to make a profit. But this product has always made a ton of money. It’s just that they think it is not enough money. They are greedy,” said Tom Gaulraupp, who has put in 33 years at the plant and is facing the prospect of becoming jobless at the age of 54.

Mark Shreck, a 36-year-old father-of-three, confessed he was one of the few workers not surprised at the layoffs, as this is the second time his job has moved to China. “I feel this is what companies do nowadays,” he said.

The Freeport workers have appealed to Bain and Romney to save their plant. The local town council, several Illinois politicians and the state’s Democratic governor have all rallied to their cause. “This company is competitive globally. They make a profit here. But Bain Capital decided to squeeze it a little further. That is not what capitalism is meant to be about,” said Freeport mayor George Gaulrapp, 52, pictured.

The anger towards Bain and Romney is palpable. Romney has become the target for the emotions of a community who built lives based on the idea of a steady manufacturing job: a concept out of place in the sort of fluid buy-and-sell world from which Bain prospers. “I didn’t have a clue what Bain was before this happened,” said Cheryl Randecker, 52. “Now when I hear Romney speak it makes me sick to my stomach.”

Good reporting, so far, but here is where it goes off the rails:


President Barack Obama’s campaign has sought to make Bain’s record of buying and selling companies – often involving job losses – a key part of its strategy of painting Romney as an out-of-touch super-rich financier. In turn, Romney, who left Bain in 1999, has defended his long career there, saying Bain ends up generating economic growth and spurring job creation. Far from profiting from layoffs, Romney has portrayed Bain as a model for the American future.

That argument stuns Illinois governor Pat Quinn. “If he thinks that is the model for American economic growth then he is barking up the wrong tree,” Quinn told The Guardian.

Of course, no one at the Romney campaign wants to be linked with the Freeport plant closure. “Governor Romney is not familiar with this issue and has not been involved in the management of Bain since 1999,” said campaign spokeswoman Amanda Henneberg.

It makes for a good story line...the evil Bain Capital, that used to be run by the Republican presidential nominee, heartlessly closing down yet another small town manufacturing plant and moving the jobs to China (not incidentally the very same country that The Pentagon insists is the supposed big military threat that we need to waste trillions of dollars defending ourselves against, but that is an issue for another day) with the gory little detail of the workers being forced to train their replacements to wrap it up in a nice neat bow. Too bad it is also shoddy reporting that only tells half the story.

For who was it that rammed through all those "free" trade agreements back in the 1990s that created the conditions that allow Bain Capital to shut down the Sensata plant and export those jobs to our alleged worst enemy? Oh, that would be Democratic President Bill Clinton, of course. And who was it who pushed through the latest round of "free" trade agreements after his predecessor failed to get them through CONgress? Oh, that would be President Hopey-Changey himself, who is now laughably trying to score political points by hyping up Romney's record as a jobs outsourcer.

So there are your choices of viable candidates at the ballot box this November if, like me, you really give a shit about how American workers are being fucked over by globalization: the scumbag vulture capitalist whose former company does the outsourcing versus the arrogant fake liberal sellout who pushes through the laws that allow him and his company to do it. And yet people look down on me when I take it personally and tell them that I am refusing to participate in the whole fucking sham.

I'll finish up with one last blurb from the article that reads like something ripped right from the script of Michael Moore's Roger and Me:


There is little chance of a happy ending for Freeport. The workers collect petitions and hold demonstrations. But they know they are likely doomed. “We are not stupid. We know we are unlikely to save our jobs. But if we get the next company that tries it to think twice, then maybe we save our neighbour’s job. Or our children’s,” said Tom Gaulrapp.

Meanwhile, bit by bit, the machines inside the Freeport plant are being packed up, beginning their long journey to China. By the end of the year it will be over. “It is kind of like part of your family being shipped out – I worked with that stuff for years. Now there’s nothing left but a discoloration on the floor where the equipment used to sit,” Gaulrapp said.

Think twice? That's a laugh. The only thing these sociopathic assholes are going to be thinking about is how best to count up all the money they make from fucking over the next town and how grateful they are to have politicians like Romney and Obama in office who will stand aside and let them do it.


Bonus: "Should I hate them for having our jobs today? No, I hate the men who sent the jobs away"

Added Bonus: "Wouldn't it be nice?"