The Nation: Some Towns Just Don't Count - Like My Home Town 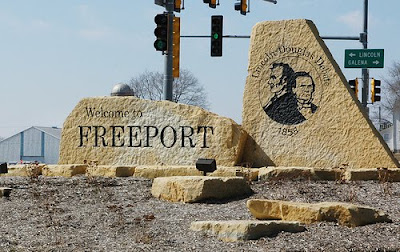 I'm still on sabbatical, but I just had to comment on an article written by John Nichols posted today in The Nation called, "Romney's Some Towns Just Don't Count Tour," only because the town in question that Nichols highlighted is in fact my own home town. Here is the relevant section of the article:


That’s the problem for Romney. He has been on the wrong side of so many economic fights that it is impossible for him to play the economic populist in communities that could stand with a little populism.

But the real story of Romney’s tour is the towns that don’t count with him.

When Romney made stops in Janesville and Dubuque Monday, he was just up the road from the town of Freeport, Illinois.

But Romney did not stop in Freeport, a town that like Janesville and Dubuque has been hard hit by trade and fiscal policies that encourage corporations to shutter US factories and ship jobs overseas—and that has been even harder hit by speculators who buy up factories, strip the assets and close them.

On the day Romney was busing across the region, employees of Freeport’s Sensata Technologies plant gathered in front of the factory with handmade signs that read:

“Mitt Romney Save Our Jobs”

“Romney: Instead of talking about JOBS, just don’t ship MINE to China”

The Sensata Technologies plant, which has been on the forefront of producing state-of-the-art automotive sensors, was owned by Texas Instruments, and then by Honeywell, before being sold in 2010 to Sensata Technologies Holding, N.V, a firm based in the Netherlands but majority-owned by Bain Capital. Bain, the private equity firm that Mitt Romney helped to develop and that continues to make him a very rich man, has since consolidated ownership of Sensata.

The workers at the plant wanted Romney to make a slight detour on his bus trip and take a look at the devastation being caused by Bain’s machinations at a plant where many of them have worked for more than thirty years.

The plant’s operations are rapidly skrinking as Sensata moves to outsource work from Illinois to China.

“This used to be a very high-volume plant and now it’s pretty much a ghost town…and by the end of the year it will be a ghost town”, Sensata employee Cheryl Randecker told local reporters.

Had Romney come to Freeport, he would have heard how much Bain’s approach has harmed not just the Sensata workers but Freeport and counties along the Illinois-Wisconsin stateline that have suffered more than their share of plant closings.

“Sensata is moving forward with the process of relocating jobs from their operations in Freeport to China,” explains John Blum, the chairman of the Stephenson County Board.

In addition to the “significant human toll on the more than 140 families that will be affected by this loss of jobs and financial security,” says Blum, “The loss of these jobs will have a tremendous impact on our regional economy.”

That’s a story that Mitt Romney does not want to focus attention on.

So his bus didn’t stop in Freeport.

Perhaps the name of Romney’s bus tour should be changed from “Every Town Counts” to “Some Towns Count.”

But those Americans who really do believe that workers in places like Freeport ought not be left behind should ask themselves whether talk about renewing the American economy is credible coming from a man who continues to profit from the plant closings, the layoffs and the outsourcing practices that are crude byproducts of Bain Capitalism.

I first posted about the closing of the Sensata plant back on January 18th in my post, "Another Globalization Hit to My Home Town." At the time, I didn't realize that Bain Capital was the driving force behind the shut down.

The problem with the Nichols story is that it fails to mention the obvious point that these actions by Sensata are happening under a Democratic president who has not only not lifted a finger to help the working and middle classes, but has also promoted the same kind of free trade agreements as the last last Democratic occupant of the White House. The same free trade agreements that British Financier James Goldsmith famously warned television host Charlie Rose about back in 1994, predicting this very outcome.

But even more to the point, the workers in Freeport have been very much complicit in their own demise. That corner of Illinois has always been solidly Republican, and it pained me greatly back in my high school and college days to watch so many of my fellow Freeporters go completely gaga for Ronald Reagan. So much so, that they even turned their backs on liberal Republican Represenative John Anderson when he challenged Reagan for the presidency in 1980, despite the fact that Anderson was their own Congressman.

So, while I appreciate Nichols calling attention to the plight of my home town, it is too bad that he and The Nation are so steadfastly determined keep wearing their partisan blinders.


Bonus: From my You Tube channel, not a lot of factory girls left in Freeport I'm afraid